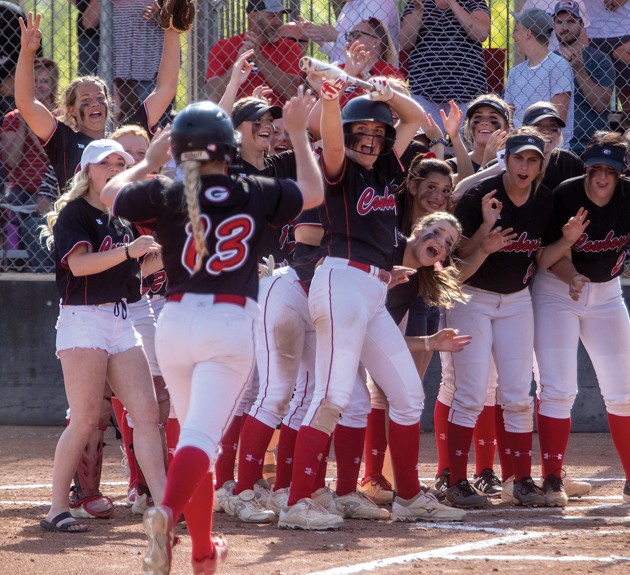 Grantsville's Jaelynn Delaney (13) comes home to celebrate with her teammates after hitting a home run during the 2019 Class 3A state softball tournament in Spanish Fork. The Cowboys' pursuit of a fourth consecutive state championship was put on hold when the Utah High School Activities Association suspended all spring sports and activities for two weeks in response to the COVID-19 pandemic.

The COVID-19 pandemic has affected virtually every aspect of life across the United States and around the world during the past week, including sports.

All professional sports leagues around the world have either suspended, postponed or outright canceled their seasons out of an abundance of caution for players, coaches, workers and spectators. The Utah High School Activities Association announced its own two-week suspension Friday afternoon after Gov. Gary Herbert’s announcement that dismissed all of the state’s public schools, bringing a halt to the spring sports season effective Monday.

The suspension also includes practices and other team gatherings, and caused the postponement of the state debate competition.

The Grantsville softball team received the news as the Cowboys were traveling to Cedar City on Friday for their first game of the season, coach Tony Cloward said. Despite Tooele County School District’s decision to suspend all sports effective Friday, Grantsville was still able to play its game against the Lady Reds. However, weather caused the cancelation of the Cowboys’ five scheduled games at the March Warm-Up Elite tournament in St. George on Friday and Saturday.

“We pretty much knew, heading down to St. George after stopping in Cedar that evening, this would probably be it,” Cloward said. “You can imagine the disappointment that we, as a team, have. The overall feeling of the team is complete disappointment, and we’re kind of in shock, too.”

Stansbury’s girls golf team was in St. George to open its season with three scheduled rounds in Washington County. The Stallions, along with their competitors from Tooele, Ben Lomond, Ogden, Juan Diego, Uintah and Cedar Valley high schools, had just teed off when coach Jeremy Alverson received the news.

“Just to think that could have been our entire season in one weekend was kind of disheartening,” Alverson said. “The spring breaks are coming up and we didn’t schedule any tournaments during the spring breaks, so we’re shut down for a month. I think the thing that everyone’s hoping against hope is that we get the second half of the season in.”

Tooele boys soccer coach Stephen Duggan, a native of Ireland who has kept in touch with friends and family at home and across Europe over the past several weeks as COVID-19 has spread worldwide, said the UHSAA’s decision didn’t come as a shock.

“I wasn’t surprised, I’ll be honest with you,” Duggan said. “I told people that I thought it was coming. I agree with it — I totally agree with it. They’ve got to stop the spread of (COVID-19) and social gatherings with big groups of people are sure ways of spreading it. I have no problem with the decision that they took.”

While he agrees with the decision, Duggan said he feels for his players, particularly the seniors, with both sports and in-person classes on hiatus for the time being.

“In a worst-case scenario where the season never gets finished, they never get to finish their final year in high school because they obviously don’t come back,” Duggan said of the seniors. “They miss out on that. I feel really sorry for them. That’s the biggest thing of all. I would hope that the season is not at an end, but I’ve just seen the news that the numbers in Utah are rapidly rising. I’m always an optimist, but I’m also a realist, and I honestly don’t think we’ll be back playing in two weeks.”

Alverson noted that many of his team’s athletes have a very close connection to their sport, and the idea of not being able to be with their teammates on the course and on road trips is difficult for them right now.

“With it being an unknown right now … you worked so hard for so long to get to this point, especially as a senior, and now they might not even have a season,” Alverson said. “Even as a coach and advisor, you don’t know how to go through this. As an athlete, how do you keep focused on a sport when everything else in your life — school and parents’ jobs and everything else is just unknown right now? It’s a learning experience for coaches and athletes alike.”

Cloward, in his first season as the Cowboys’ softball coach, has never seen a season disrupted in such a way in his 25 years of coaching various sports. He echoed Duggan and Alverson in their concerns about their graduating seniors, as well as lamenting the potential of a lost chance at a fourth consecutive state championship in the wake of a hard-working offseason.