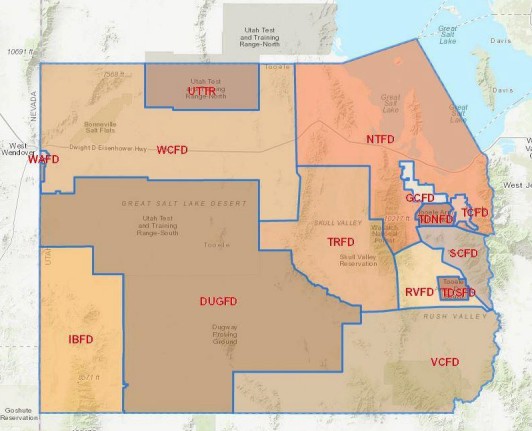 The Tooele County Council listened to a consultant’s report on how the county can best fulfill their legal obligation to provide fire and emergency services to the unincorporated areas of southeast Tooele County during their June 21 meeting.

Joseph Pozzo, with the Center for Public Safety Management, outlined three possibilities included in a report commissioned by the Council that concluded a several months long study. The choices were: maintain the status quo of a patchwork of local agreements, develop new agreements to upgrade financial support and enhance volunteer fire departments or implement a county fire department for the southeast county area.

“You could maintain the status quo [individual agreements with local volunteer fire departments],” Pozzo said. “This is a risky decision to take because you know you’ve got some needs out there [that this decision may not address.]”

The second alternative would help address some of those needs, like aging fire trucks, outdated equipment and personal gear, according to Pozzo.

“Develop new agreements with the fire departments,” Pozzo said. “Tie additional financial support to existing fire departments to specific needs with accountability on how the  funds are spent. Spend it on equipment not on facilities.”

Pozzo suggested a county grant program on an annual basis.

“Departments could say ‘We need this,’ and you could get some oversight in,” Pozzo said.

“You may not need this, but it was an alternative we had to look at,” Pozzo said.

As considered in the CPSM report, a southeast Tooele County Fire Department would include a fire station near the intersection of state Routes 36 and 73.

The estimated cost for a three-bay fire station designed to be occupied 24-hours/day, house County fire and wildland equipment, and have the capability to serve as a command center for campaign operations in the southeast county area is $3.4 and $4.0 million along with another $500,000 for furniture, fixtures and building equipment.

The study estimated startup costs for fire fighting equipment to be between $822,000 and $1.0 million with annualized equipment costs of $69,000. An additional $67,000 in startup costs would be needed for uniform and protective clothing.

The new fire department would have a projected annual salary and benefit cost of $650,000 with another annual cost of $17,000 for uniform and protective clothing costs to cover the costs of three shifts with nine total staff.

Pozzo had some other recommendations.

He suggested that the county build a fire station South Rim, which now has 340 homes.

Stockton Fire Department, which provides fire service to South Rim, has indicated willingness to move equipment, including an engine, to a South Rim Fire Station, according to Pozzo.

Pozzo also suggested that regardless of what alternative the County Council chooses, the county should apply for a Federal Emergency Management Agency grant that is available to help fire agencies recruit and retain staff.

Pozzo also recommended the creation of a position for a county fire services director. The director would be responsible for updating and monitoring fire protection agreements, monitoring fire service expenses, and coordinating county wide support and training.

Pozzo suggested no new staff may need to be hired. The current county emergency services director and county fire warden may be able to fulfill the suggested role, he said.

The County Council listened to the report and said they would continue the discussion of fire services for southeast Tooele County during future meetings.