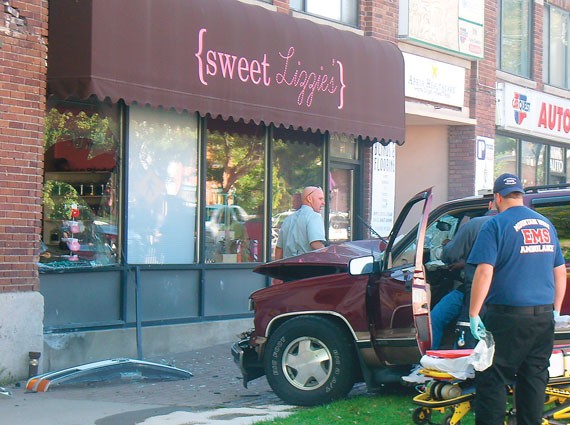 A Mountain West Medical ambulance crew responds to the driver of a suburban, City Council member Dave McCall, who ran into Sweet Lizzie’s on Main Street in Tooele Wednesday morning.

A Tooele City councilman and his wife were taken to the hospital Wednesday morning after he crashed into a building in downtown Tooele.

Councilman Dave McCall was driving north on Main Street at about 10 a.m. when he suddenly turned his Chevrolet Suburban into the Merc Plaza, hitting the wall and window of Sweet Lizzie’s candy shop. According to Sgt. Bob Gutierrez of the Utah Highway Patrol, McCall reported having a massive coughing fit, which caused him to lose consciousness.

“He says he’s been fighting a cold the last few days and in fact was on the way to the doctor when this happened,” Gutierrez said. “He had a coughing spell right before he crashed, and that was the last thing he remembered until his wife was telling him to take his foot off the gas. For some reason he blacked out after that coughing spell.”

Gutierrez said when he spoke to McCall at the hospital, about a half hour after the accident, he was alert, but did not speak with him at the scene. No tests for impairment were done, Gutierrez said, because there were no indicators at the scene of impaired driving.

McCall and his wife were both transported to Mountain West Medical Center with non life-threatening injuries. They were released from the hospital Wednesday night and were expected to recover fully.

Gutierrez said given the nature of the crash and the force with which McCall hit the building, it was fortunate the couple’s injuries were not more severe, and were likely mitigated because they were wearing seatbelts and the airbags deployed.

“He [McCall] was just pretty grateful that he didn’t hit anybody or injure anybody else,” Gutierrez said. “He was pretty concerned about that.”

The front bumper of the Suburban had come off in the impact and the gas tank had ruptured, causing the fuel to leak out on the sidewalk and some of the grass. Fire crews soaked up what fuel they could with a sand-like mixture and removed the affected dirt and grass that remained.

Although officers from the Tooele City Police Department were first to the scene of the accident, the UHP was called in to conduct the investigation because of McCall’s position on the Tooele City Council and the possible conflicts of interest that could entail. Gutierrez said handing such investigations over to other agencies is not unusual in instances such as these.

“Anytime there’s a possible conflict, another agency will get called,” he said. “We do the same thing if one of our state vehicles are involved in the crash, we’ll call in the city or the county.”

Lori Showell, manager of Sweet Lizzie’s, was still sweeping up dust, glass and debris from the store Wednesday afternoon. The bulk of the candy was kept in the east end of the store, so toys and housewares took the brunt of the impact. Showell said there is not yet an estimation of the quantity or value of the merchandise affected by the crash.

“Glass was everywhere,” she said. “There were some teddy bears and stuff, and I guess you could shake the glass out but you couldn’t know if there were tiny shards of glass left in them.”

Showell said she was in shock when she got to work about a half hour after the incident and saw the damage. She was concerned, too, about the broken window and the possibility of theft if it was not patched up quickly. But the window was covered quickly by building management, she said, and she was impressed by the response from city units cleaning up the wreckage and leaking gasoline outside.

Overall, she said, the incident was unfortunate and frustrating, but turned out better than it could have.

“I’m just glad no one was really hurt and there was no one in the store. That would be worse than anything,” she said. “It’s not as bad as it could be.”