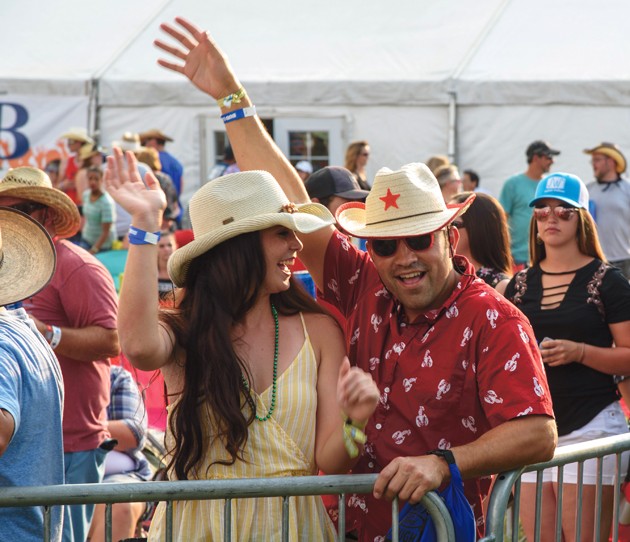 Idaho residents Rachel Rogers and Cody Delosreyes enjoy the music of Aaron Watson on the main stage at the 2018 Country Fan Fest.

It’s back and bigger.

Country Fan Fest will return June 25-28 to Deseret Peak Complex. This will be the fourth straight summer for the festival, which has become the largest outdoor music festival in Utah, according to festival director Bracken Hudson.

“It looks like this will be our best year ever for attendance,” he said.

Overnight camping at the Country Fan Fest campgrounds is sold out, but admission tickets and other passes are still available, he said.

Around 25% of ticket sales for 2019 have come from out of state. In the past, Country Fan Fest has had attendance from 48 different states with most out of state attendees coming from Idaho, Nevada, Wyoming and Colorado, according to Bracken.

The festival has 18 performing groups, including Rodney Atkins, Brett Young and Luke Combs lined up to perform.

Comb’s latest EP, “The Prequel,” was released in June. All five tracks from “The Prequel,” are currently in Billboard’s Hot Country Songs Top 25, something that has not been accomplished by a country artist since Johnny Cash in 1959.

Country Fan Fest has added social axe throwing to the list of activities in the camping area.

Tethered hot air balloon rides will be offered for $10 on the softball fields with all proceeds going to the local Tooele County charity, 180 Ministries for Girls, according to Bracken.

Festival organizers use local Tooele County vendors for everything from catering to signs, according to Bracken.

Bracken said he worked with the Tooele County Chamber of Commerce and Tooele County tourism consultants to include information on Tooele County’s businesses including restaurants, gas stations and convenience stores, and tourism opportunities in the festival guide that is mailed to all ticket holders.

For more information on performers and activities and to purchase tickets visit www.countryfanfest.com.

“We are part of the community and we want to promote Tooele County and support our local businesses and charities,” Bracken said.