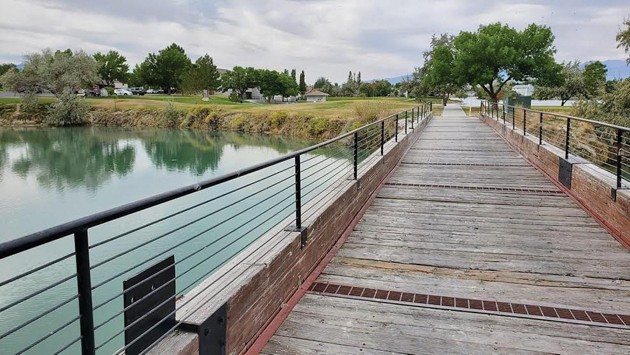 The Tooele County Commissioners and the Stansbury Park Service Agency have debated over who owns the Millpond bridge in Stansbury Park for years, especially after it was determined the bridge needs $60,000 of repairs.

“It has been quite the situation dealing with the bridge between the Service Agency and the County,” said Brenda Spearman, a SSA board member.

The bridge was built in the 1980’s and according to Spearman, no one knows who built it.

“There is some documentation that we have that the Service Agency deeded it to the county in the 90s but there is no documentation at the county offices that it happened,” said Spearman. “We have meeting minutes and a record of a check from the county for $50,000 for the bridge.”

Even though there is no documentation at a county level, the county does own the bridge and is responsible for maintenance on it, according to Spearman.

The county also owns the medians in the middle of the road on Stansbury Parkway and the Service agency maintains them, she said.

In 2018, the Service Agency had an engineering company look at the bridge, because they noticed that it needed repairs.

The company found that the bridge needed $60,000 worth of work done to the bridge, because of structural issues with parts that are holding it out of the water and the railroad ties on the bridge no longer being bolted in correctly.

“At the time, the service agency came to an agreement with the county that the county would fix the bridge and deed it back to the service agency,” Spearman said. “When new members [county commissioners] came in, they weren’t as willing to work with us to fix the bridge. Currently, two of them don’t think they need to fix it and one of them thinks that there is error on both sides and they should work with the Service Agency to get it fixed and moved on.”

Spearman said that the Service Agency had to close off the bridge to vehicular traffic, such as golf carts about a month ago.

According to Milne, seven or eight years ago, he learned that there were some boards that were loose on the bridge and maintenance needed to be done.

After this the issue was dropped for a while, Milne said

About five or six years ago, according to Milne, the director of the Service Agency came forward and said that he had found minutes from the Service Agency’s meeting years ago when they said the bridge was deeded over to the county.

Milne said that the director said that they had submitted needed documents to the county to be recorded but they never were recorded.

“We haven’t been able to find any minutes from the county commission meetings that suggest that the county owns that bridge,” Milne stated. “There is one other element that they found from way back when. It was a transfer of tourism funds saying that the county purchased the bridge. There is nothing to say that the county bought the bridge, because the bridge doesn’t have anything to do with tourism.”

Milne said that he is sure that there is no proof from either the service agency or the county commission to say that the bridge belongs to the county.

“There are no records on either side that prove or disprove who owns the bridge,” he said.

Three years ago, according to Milne, the commissioners committed to the service agency that they would go 50/50 to fix the bridge but they wanted documentation saying that the county doesn’t own the bridge and it’s not their liability.

In a memo dated Oct. 2, 2020 to the County Commissioners, Colin Winchester, deputy county attorney, states that after researching the Millpond bridge ownership, it is his opinion, despite a lack of documentation in county records, that the County Commission agreed to trade with the Service Agency in 2003. The trade agreement was that the County would assume ownership and maintenance of the bridge and the Service Agency would maintain the greenbelt areas along Stansbury Parkway.

“We are saying, ‘you guys own the bridge and you can maintain the medians still. The service agency can do whatever they want with them. We don’t maintain medians anywhere else in the county. We are not going to admit that we have ever owned the bridge or are liable for it.”’

The agreement was talked about during the Oct. 6 county commission meeting.

Next week, the item will be on the agenda for the meeting again.