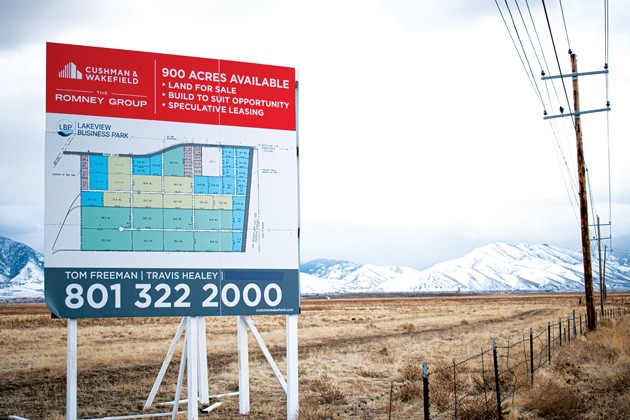 900 acres east of Sheep Lane is part of the The Romney Group’s Lakeview Business Park.

The Tooele County Commission approved a revised agreement with the Romney Group’s Lakeview Business Park during their meeting on Monday night at the County Building.

The County Commission approved a lengthy agreement with the developers of the Lakeview Business Park in November 2008, according to Commission Chairman Tom Tripp.

The agreement bound the county to certain obligations including building the roads, water,and sewer infrastructure for the project, he said.

Since the adoption of the agreement, the Romney Group purchased an additional 400 acres north and west of Utah Motorsports Campus to add to the business park. That acreage was part of Grantsville City at the time it was purchased. The Romney Group also had their 900 acres east of UMC annexed into Grantsville.

“The conditions have changed, so the agreement needs to be changed,” Tripp said.

The new agreement, which Tripp said is much shorter,  calls for the County to advance $6 million to the developers of the business park to be used for public infrastructure. The $6 million will be paid back with 7% annual interest.

The funds would go through the Grantsville Community Redevelopment Agency, according to Tripp.

Tripp also proposed that the tax increment for the developers be raised from 60% to 70%.

“I look at this as a liability issue,” said Tripp. “We’re trading one set of liabilities for another.”

The $6 million would come from the proceeds of the sale of UMC, according to Commissioner Shawn Milne.

Three years ago the County Commission envisioned regional infrastructure for Erda with a sewer line to be built that would serve the Romney Group’s business park, the airport in Erda, several large landowners, the Skywalk development, and the Church of Jesus Christ of Latter-day Saints.

“Today, for various reasons, we have none of them on board,” he said.

“We have a lot of people out there that would say that $6 million could be better used for infrastructure for growth,” Milne said.