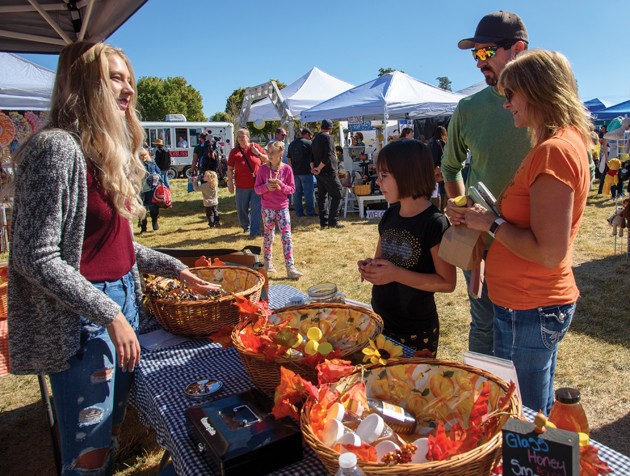 Jorden Waite of Harvest Lane Honey talks about their products to Lauren, Brian and Sarah Moore at the Honey Harvest Festival held at Clark Historic Farm on Oct. 12, 2018.

April 18, 2019
County approves another round of grants for tourism projects

The County Commission approved $192,000 of tourism grant applications as recommended by the Tourism Tax Advisory Board during its meeting Tuesday night at the County Building.

Also included in Tuesday night’s grants were $1,500 for the National Pony Express Association, and $7,500 for the Utah Sport Bike Association — a non-profit organization that organizes education, safety and racing events at Utah Motorsports Campus. Half of the grant is to be used for out of county advertising and the other half to pay for travel incentives to help bring in riders.

At Your Leisure, an outdoor and travel show that airs on KUTV, received $63,000 to produce a series of shows featuring Tooele County. The grant requires AYL to work with State Street Partners, the county’s contracted tourism consultant, to develop the content of the shows.

Transcript Bulletin Publishing received a $25,000 grant for printing and distributing the Tooele County Magazine Visitor’s Guide for out of county marketing. TBP also received a post-performance reimbursement grant of up to $15,000 to develop an online version of the visitor’s guide with trackable metrics.

This is the the third round of tourism grants approved by the County Commission. Including Tuesday night’s grants, the County has approved 27 grants totaling $297,789.

With a budget of $400,000 for tourism grants, the Tourism Advisory Board has a balance of $102,211 to award with two more applications to consider.

The requests included in those two outstanding applications total $140,435, according to Carrie Cushman, Tourism Tax Advisory Board chairperson.

State law requires that tourism tax dollars be used to promote tourism or for the maintenance and operation of tourism-related facilities.

The Tourism Advisory Board consists of representatives of motels, restaurants and local tourism industries and attractions. Its composition is specified in state law. State law requires the board weigh in on how tourism tax dollars are spent.

The county expects to take in almost $1.1 million in tourism taxes in 2019.

The Tourism Tax Advisory Board asks organizations that receive grants to submit a post-event report that includes information on attendance and where people came from by zip code, samples of advertising, how the project acknowledged funding from the county at their event, use of the county’s “So much, so close” brand, and how they marketed to an out of county audience, according to Cushman.