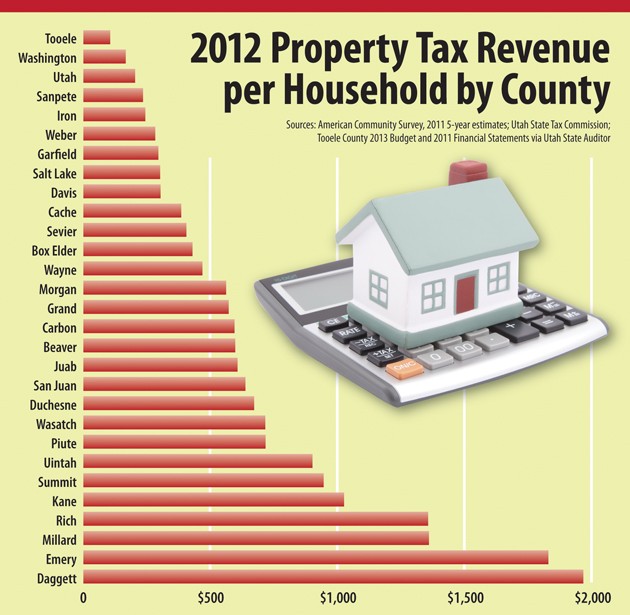 March 14, 2013
County at bottom of list for property tax collection

For 25 years Tooele County Commissioners have avoided increasing taxes without decreasing county services. That, however, may now change.

Commissioners have cited mitigation fees, paid by industries that dispose of waste in the county’s west desert, as the reason why property taxes have remained low.

“Mitigation fees go into our general coffers and that’s what helps us to keep our taxes down and keep services up,” Commissioner Jerry Hurst told the Transcript-Bulletin in 2010.

In 2012 Tooele County’s property tax rate of .001302 was the second lowest of Utah’s 29 counties. It generated $1.9 million in commercial and residential property taxes for the county, according to the county’s 2013 budget filed with the state auditor’s office.

Washington County was second lowest at $166 in property tax collected per household.

The Utah Taxpayer’s Association notes in its “2011 Cost of Government Report for Utah Cities and Towns,” there is a general trend that the smaller a population, the higher the cost per capita of government.

That relationship is not absolute. The UTPA report also points out that Salt Lake City and West Valley City — Utah’s two largest cities — have a cost per capita that place them in the middle of the cost per capita of all Utah cities.

Tooele County is not small. In terms of households, it ranks seventh place among Utah’s counties at 18,019. However, the county’s $105 tax collection per household is lower than counties of similar size, according to tax revenue reported by counties to the state auditor’s office.

Cache County, with 34,599 households, ranks just above Tooele County in household size at sixth place. It has a property tax collection of $384 per household.

Box Elder County, with 15,981 households, ranks just below Tooele County at eighth place. It has a property tax collection rate of $428 per household.

Hazardous waste mitigation fees from the west desert, primarily consisting of fees paid by EnergySolutions, dropped from $5.9 million in 2011 to an estimated $3.7 million in 2012.

With mitigation fees anticipated to remain flat for 2013, the Tooele County Commission adopted a 2013 budget last December that proposes an 82 percent property tax increase to balance the budget.

Under the proposed increase, taxes paid on a $150,000 home in the county would go up by $88 a year, according to Tooele County Auditor Mike Jensen. The increase will yield an additional $2.6 million in revenue for the county.

The county’s low property tax collection is also affected by a lower than average total assessed value of property.

Mitigation fees were great while they lasted, but the county is now facing a different revenue picture, according to Commissioner Shawn Milne.

“This is the new reality we must face, since the method of financing said past practices has dried up,” he noted. “When our bank account was full of monies from huge mitigation fund payments by industrial businesses located in our county, we could easily pay for the level of service we’ve become accustomed to. However, that’s no longer our situation. Thus, we must adapt in order to survive.”

It’s time to reduce services or raise taxes, he said.

“Raising taxes is a decision the public will have to make,” said Milne. “Yes, as commissioners we will make the ultimate decision, but we need to hear from the public what they want. Do we keep reducing expenses so taxpayers can keep their own money, or are they willing to shoulder an increase in taxes to maintain some services? That’s the question.”