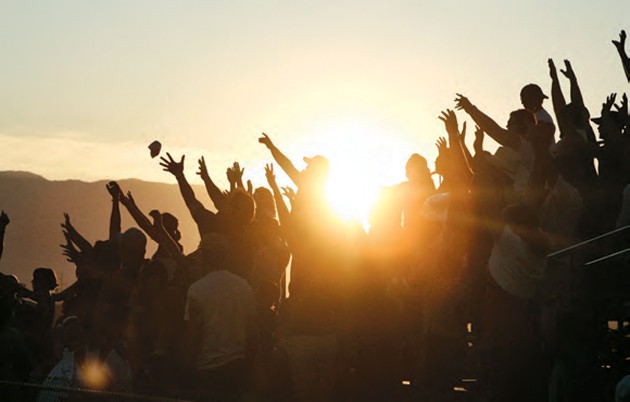 Crowds cheer for free T-shirts Aug. 1, 2009 at the Search and Rescue Demolition Derby. Events held at Deseret Peak Complex are in a state of flux with the county’s budget uncertainty.

Advisory committee to help create use plan for Deseret Peak ♦

After laying off 29 county employees last week in a move defined as “restructuring,” Tooele County Commissioners said their work to trim the budget isn’t over.

In fact, one commissioner predicts it may be late summer before employment at the county  stabilizes.

“It is my goal to be able to tell county employees in six months that their jobs are secure,” said Commissioner Shawn Milne. “We have some more restructuring to do, but in six months we should be able to do all the belt tightening we can do.”

For instance, at last week’s commission meeting, he presented a cash flow projection based on an average monthly accounts payable of $200,000. But after the meeting the accounts payable average was revised to $300,000 per month, he said.

Milne is also waiting for a report back from two departments that were restructured last week.

Seven days ago the commissioners dismissed the staff of the parks and recreation department and the building maintenance department — except for the department heads, Mark McKendrick and Dal Shields. They gave McKendrick and Shields 30 days to bring forward a new plan for a merged department with reduced costs.

Milne refers to the 30-day period as a “timeout.”

While McKendrick and Shields were not given a dollar target for their new operations plan, the commissioners have directed change as to how county facilities will be utilized for events from now on.

The county will move from a position of managing events, like at Deseret Peak Complex, to letting leagues, organizers, coordinators, and the public manage their own events. Fewer full-time county employees will be used for event management, according to Milne.

“The intention is not to close these facilities permanently,” he said. “But we can’t continue to do business as usual while the county’s cash flow situation is critical.”

As of last Tuesday, Deseret Peak Complex is not accepting new reservations. Also, any previously scheduled events that will cost the county more than fees collected for the event will be canceled, said Milne.

The commissioners have not reached an agreement yet on whether to continue two major county sponsored events scheduled for Deseret Peak: The annual Tooele County Fair, and Wild Horse and Heritage Days, which premiered last year.

To assist McKendrick and Shields in their effort to develop a new operations plan for county-owned facilities, an advisory committee will be assembled.

“We have had plenty of residents come forward and offer to help,” said Milne. “I want to select from this group a few people with a financial background that can start taking a look at some of our most used facilities and see if they can determine what an acceptable fee would be to keep those areas open.”

Milne expects to publicly announce the members of this ad hoc committee later this week.

“Our action last Tuesday does not mean that facilities will be mothballed and allowed to crumble up or go unused by our citizens,” he stressed.