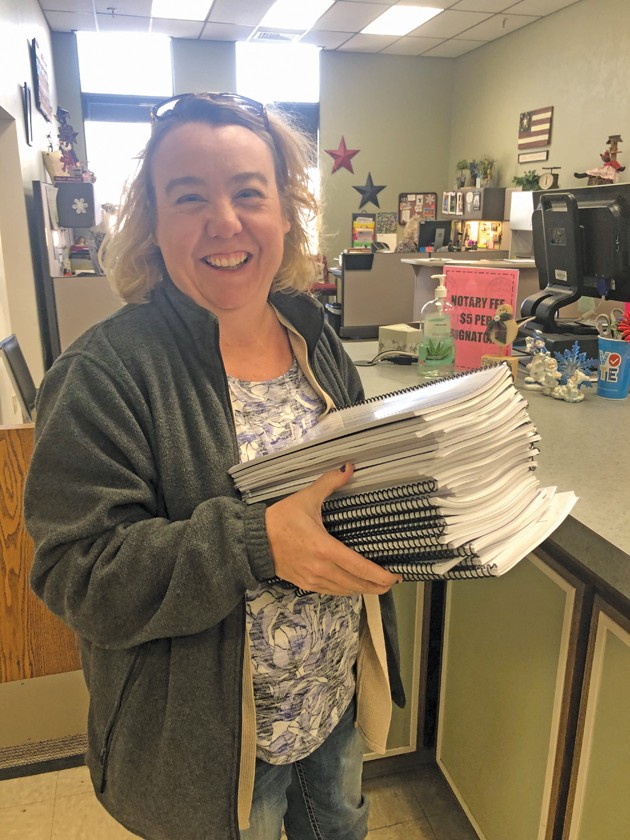 Brenda Spearman, Tooele County cordinator for the tax reform referendum, turns in the last of signature packets at the county clerk’s office on Jan. 21, 2020.

Tooele County volunteers collected over 3,500 signatures for the referendum to place Senate Bill 2001, the state tax reform measure, on a ballot to allow voters to decide the legislation’s fate.

That’s about 1,000 more signatures than were needed to make Tooele County one of 15 of 29 counties in the state to meet a threshold in signature numbers as required by state law governing referendums.

Statewide referendum sponsors said they have enough signatures that the referendum should make it to the ballot, but an announcement issued this morning from the governor and state Legislature changed the playing field.

“When the 2020 general legislative session opens Monday, legislative leaders will introduce a bill to repeal the changes made in the special session. The intention is that the bill will be ready for the governor’s signature before the completion of the first week of the session. Once the repeal is signed into law, the Legislature will begin work under the reinstated tax code to prepare the fiscal year 2021 state budget,” reads the release.

The full repeal of SB 2001 will allow the Legislature to prepare the new budget without the uncertainty of the outcome of a referendum, according to the statement.

“In recent weeks, it has become clear that many people have strong concerns regarding legislation passed in December to restructure and revise our tax code. They expressed their concerns by signing a petition to include a referendum on the ballot later this year. We applaud those who have engaged in the civic process and made their voices heard,” said the three leaders in the joint release.

But Utahns have not heard the last of tax reform.

“We will take time to reset and address this issue in the future in a way that allows all Utahns to fully understand the challenge we face, engage in the debate over the best solutions and, ultimately, enact policy that best positions Utah for decades to come,” reads the statement.

Tooele County’s efforts to collect signatures began on a snowy day under a canopy in front of the state Liquor Store in Tooele.

The referendum gained momentum after Harmon’s and Associated Food Stores threw their support behind the referendum, according to Spearman.

“Things really picked up after Harmons got involved and Associated Foods allowed volunteers in their stores,” she said. “Without being able to be at Macey’s, I am not sure we would have had so much success out here.”