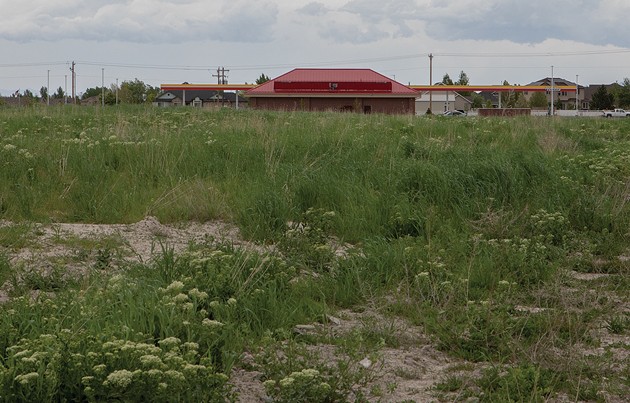 A vote to rezone a property near the Holiday Oil on Bates Canyon Road was postponed at Tuesday’s County Commission meeting.

With one Tooele County Commissioner out of town on county business, the two remaining commissioners were split on a rezone on Bates Canyon Road.

Because of the split, a motion to approve the rezone of 2.78 acres south of Holiday Oil from commercial neighborhood to commercial shopping died for the lack of a second during Tuesday night’s County Commission meeting.

Commission Chairman Tom Tripp made the motion to approve, but Commissioner Shawn Milne declined to second the motion. Commissioner Kendall Thomas was in Cedar City on county business.

Although the motion to approve the rezone died for a lack of a second, the request will be brought back for a future County Commission meeting.

Milne explained that although he didn’t “inherently disagree” with the rezone request, he has some reservations about the applicant Jesse Lassley.

“I do have some friction over how the Holiday Oil subdivision took place,” Milne said.

Lassley owned the parcel at the time it was subdivided and purchased by Holiday Oil.

“I’m looking for good community partners that work well with the county and taxpayers,” Milne said. “I feel other matters lately have proven that that’s not the case with this particular applicant and I still have a sore backside about how taxpayers have had to take care of the cost of certain improvements for Bates Canyon Road.

“I feel developers ought to pay proportionally their share of certain improvements as they profit from their developments,” he added. “… Until I feel like there is more of a compromise perspective from the developer, the applicant in this case, I’m not inclined to proceed.”

The change to commercial shopping designation allows for a greater variety of commercial uses. Lassley told the County Commission that he has had medical offices indicate an interest in locating on the property, but commercial neighborhood does not allow medical office use.

The Tooele County Planning Commission heard Lassley’s rezone request for the parcel in May, but put off making a decision until its June 19 meeting after receiving information on the progress of work on widening Bates Canyon Road and other improvements to the road in front of Holiday Oil.

At the June 19 meeting, the planning commission voted to recommend approval of Lassley’s request to rezone the property south of Holiday Oil.

Prior to Tuesday night’s County Commission meeting, Lassley submitted a traffic study conducted by Hales Engineering, a Lehi-based transportation solutions firm, which indicated there would be no significant increase in traffic caused by the rezone from C-N to C-S.

Lassley took to the podium to defend his involvement in the Holiday Oil rezone and improvements to Bates Canyon Road.

The traffic study that was completed in 2012 for the original rezone of the property on the southwest corner of Bates Canyon Road, which included both the commercial property and the residential development, found that “no off-site mitigation measures are required to Bates Canyon Road,” according to the study.

“Even though the study said it wasn’t needed and it was not required of me, I went ahead and donated the property for the widening of Bates Canyon Road in front of Holiday Oil,” Lassley said.

Lassley said he thought that was being a good community partner.

Nevertheless, when it came time to vote on approving Lassley’s request during Tuesday night’s meeting, Milne did not offer a second to Tripp’s motion.

Tripp declared the motion failed due to the lack of a second.

“Then my motion would be to deny, but I suppose that wouldn’t get a second either,” said Milne.

Milne and Tripp agreed to table Lassley’s request to a future meeting.

“Hopefully we can come to some sort of kumbaya with the applicant before it comes back up again,” Milne said.