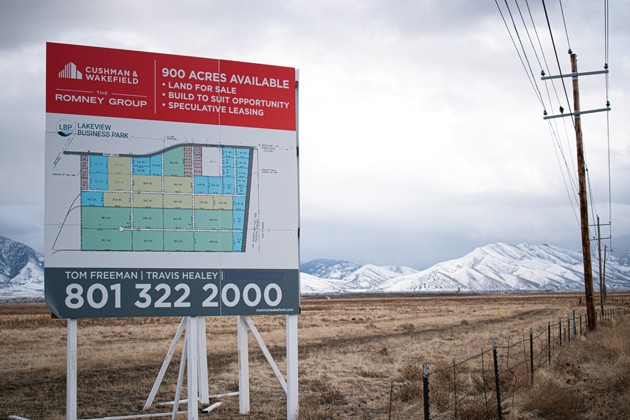 The Romney Group is building the Lakeview Business Park on 900 acres east of Sheep Lane. January 2020.

Tooele County and the Romney Group are proceeding with plans for a 900-acre business park on Sheep Lane across from the Utah Motorsports Campus.

Meeting as the county’s Redevelopment Agency board of directors, the County Commission considered a resolution Tuesday night to designate the proposed Lakeview Business Park Redevelopment project area and authorize the preparation of a draft project area plan, budget, and work necessary to create a community reinvestment area.

In 2018, the Romney Group, a Salt Lake City-based real estate investment company, announced during a presentation at a Tooele County Commission meeting that it had signed an option to buy a 900-acre parcel east of Sheep Lane from the Utah Motorsports Campus and Deseret Peak Complex from the Miller family.

Previously known as the Miller Business Park, the property was at one time on the short list of sites considered for the new state prison.

“The new exchange on I-80 is opening up a lot of opportunities for development in Tooele County,” said Josh Romney with the Romney Group. “This is a tremendous opportunity for Tooele and businesses that want to locate out here.”

Without naming specific businesses, Romney said the Lakeview Business Park would have a mix of office, retail, industrial, distribution, and research and development, as well as convenience stores, gas stations and hospitality businesses to complement the activities at Utah Motorsports Campus.

In January 2019, following a presentation from Romney and representatives of Zions Bank, the Tooele County Board of Education voted to enter into negotiations with the county and the Romney Group for tax increment financing for the development of the business park.

Tax increment financing involves the district foregoing a portion of its property tax from the increase in the property’s value for a specified period of time as the property is developed.

Susie Becker, with Zions Bank Public Finance, presented an analysis of the property’s potential growth in taxable value to the school board.

Based on a proposed percentage of 80% of the tax increment, the school district would receive a total of $26.4 million over the proposed 20-year tax increment period.

At the end of the 20-year period, the school district would receive $13.6 million annually in property tax from the business park, according to the Zions Bank analysis.

Without the tax increment, the project won’t happen, Romney told the school board.

“This project doesn’t move without the tax increment financing,” he said. “We don’t have the money for the infrastructure — water, sewer, power.”

The Romney Group is working with Cushman & Wakefield, a global commercial broker company, on the project. The project will be named the Lakeview Business Park.

The RDA meeting Tuesday was held at 6:30 p.m. prior to the County Commission’s regular business meeting at 7 p.m.