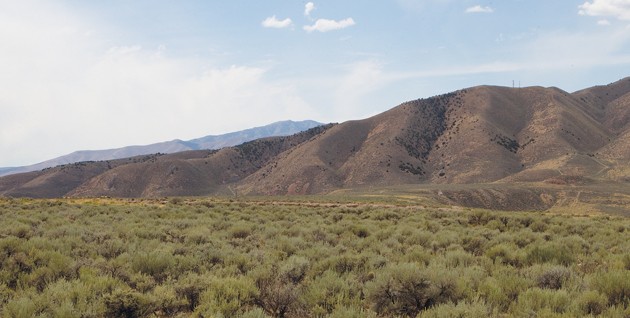 Erecting windmills on Stockton Bar and along South Mountain was proposed by Energy Utah. The Tooele County Commission voted to delay the vote on the windmills.

August 8, 2013
County delays vote on windmill farm due to setbacks

A developer that wants to invest $100 million in a windmill farm near Stockton will have to wait until September to find out what kind of zoning requirements he will face if he moves forward with the project.

Rocco Vrba, principal partner of Sandy-based Energy of Utah, has been working with Tooele County planning officials since April to develop a county ordinance that governs the size, placement, and other conditions for large wind energy projects.

“County ordinances are silent on windmills,” said Kerry Beutler, Tooele County planner. “So under current county law, windmills would not be allowed anywhere.”

The county commission voted 2-1 Tuesday to delay a vote on the proposed ordinance until their Sept. 3 meeting. Commissioner Shawn Milne was the lone dissenting vote.

After two public hearings and two lengthy meetings, the Tooele County Planning Commission forwarded a proposed ordinance to the county commissioners that included a set back from property lines of two times the blade height of the windmill towers.

Blade height is the distance from the ground to the top of the windmill’s blades at their highest point. The maximum blade height was fixed at 600 feet in the ordinance.

The ordinance also included a five-mile setback from any residence or occupied building.

The five-mile setback was proposed by the planning commission to address public concerns of impacts on health and property values, according to Beutler.

Residents of Stockton’s Rawhide subdivision expressed concerns at the planning commission’s public hearings about Energy of Utah’s proposed windmill farm that is planned for the Stockton Bar and South Mountain just north of their homes.

The issue of health concerns caused by large windmills remains unsettled in the public heath community.

However, Dr. Megan Shutts-Karjola, a Tooele physician and Rawhide resident, said she could supply the county commission with plenty of documentation of health concerns and property value decline caused by windmills.

Other county ordinances in Utah do not distinguish a different distance for a setback from property lines and a buffer zone.

Tooele County’s proposed two times the blade height is a larger setback than any other setback for windmills in the state, according to information presented by Beutler.

All three commissioners agreed that five miles was too large of a buffer zone, but there was no agreement how large the buffer zone should be.

“I think five miles as a buffer is not realistic,” said Milne. “1,200 feet or two times the blade height is much more reasonable.”

Milne made a motion to approve the ordinance with the setback and buffer zone changed to 1,200 feet. His motion died due to the lack of a second.

Commissioner Jerry Hurst said that a five mile buffer would preclude any wind farms from occurring.

“I think five miles might be too much, but 1,200 feet may not be enough,” he said. “I’m not prepared to move forward until I’ve had adequate time to weigh the advantages and disadvantages.”

Commissioner Bruce Clegg also said he was not prepared to approve the buffer zone size.

“It would be better for us to deny wind projects altogether rather than adopt the five mile ordinance,” he said. “But I’m not prepared at this time to decide what the best distance is for a buffer.”

Clegg and Hurst then made a motion to postpone a decision until their Aug. 20 meeting; however, with that meeting being the Truth-In-Taxation hearing, the commissioners decided to wait until Sept. 3 to reconsider the large wind energy project ordinance again.