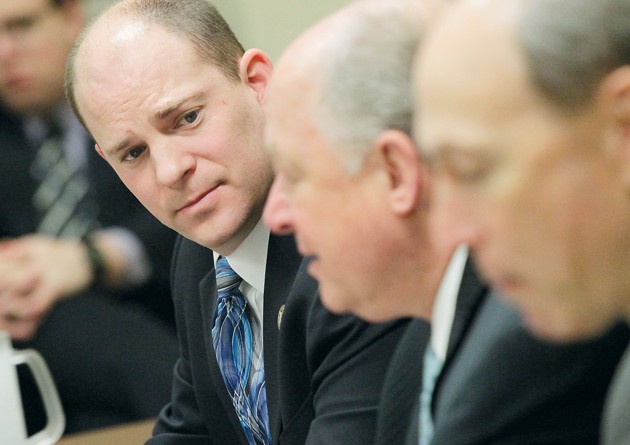 One state legislator representing Tooele County is perfect, according to the Utah Taxpayers Association.

The 100 percent rating was more by chance than a deliberate attempt to get a high rating, said Thatcher.

“While I agree with the Utah Taxpayers Association in principle, I have in the past disagreed with them on specific legislation,” he said.

“I prefer getting my information directly from my constituents, not through a special interest group,” he said.

For example, Thatcher said he only has two elementary schools left to visit and he will have visited all the schools in his district to discuss education issues with principals and teachers.

The lowest rating by the association in the Senate was 57.9 percent, which was earned by Sen. Luz Robles, D-Salt Lake City. The average Senate score was 88 percent.

Knutson’s 95 percent ties his score with that of Sen. Howard Stephenson, who is president of the Utah Taxpayers Association.

Both Knutson and Stephenson voted against Senate Bill 226.

SB 226, which was approved by the Senate but was not considered by the House, would have allowed the state to collect sales tax from some Internet transactions.

“I don’t necessarily follow the Utah Taxpayers Association positions,” said Nelson. “I vote my conscience and my principals, including protecting the taxpayer’s pocket book and keeping taxes low.”

Nelson ran afoul of the association on four of 23 bills used to rate representatives.

Nelson voted against Senate Bill 34, a bill that required bonds and tax related issues to be voted on only at the regular November election; Senate Bill 82, which created a website for parents to access a student learning profile; and Senate Bill 271, a bill that made changes to previous legislation in school-grading.

The association supported those bills.

Nelson voted for HB 197 that would have created a state earned income tax credit. The association opposed that bill.

Sagers joined Nelson in opposing SB 271 and SB 82. Sagers also voted for HB 372, which would have added an additional tax to nicotine cartridges used with e-cigarettes. The association opposed HB 372.

The complete scorecard can be viewed at www.utahtaxpayers.org.