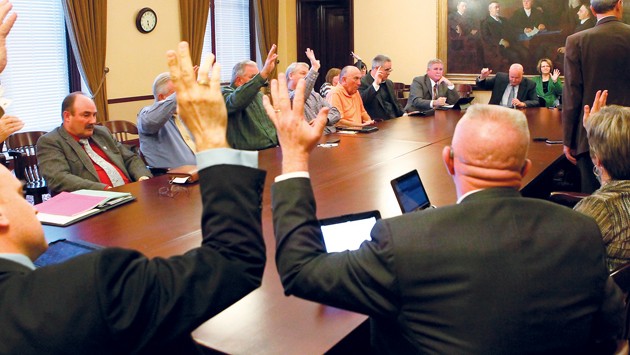 City and County officials raise their hands during a straw poll on whether to move forward in pursuing the state prison relocation Wednesday evening during a caucus meeting at the State Capitol. Tooele County representatives continued to voice support for the prison move.

At the capitol building, about 30 elected officials and residents from the county gathered inside the capitol board room for one last public meeting with legislators before the March 14 conclusion of the 2013 General Legislative Session.

Legislators were busy in appropriations committee meetings when the 5 p.m. caucus started. However, Rep. Merrill Nelson, R-Grantsville, briefly stepped into the caucus to meet with attendees. While there he conducted a straw poll to measure support for continuing the pursuit of relocating the Utah State Prison from Draper to Tooele County.

“I would like to have a sense of where you community leaders are because I don’t want to push anything past you,” he said.

Nelson explained he understood that there are unanswered questions about the prison relocation, but he wanted to know if people were dead set against the idea of moving it to Tooele County.

He then asked for a show of hands to see how many people in the room support taking the next step to look at the prison relocation. Grantsville City Mayor Brent Marshall was the only one who didn’t raise his hand.

“I almost feel like we still don’t have enough information for anybody to really develop some kind of opinion whether you’re for it or against it,” said Marshall. “There are still so many variables that are out there.”

Others in the meeting expressed qualified support for consideration of Tooele County as a site for relocation of the state prison. Five-Mile Pass, land west of South Mountain between Tooele and Rush Valleys, and Timpie are currently considered as possible locations for the facility.

“I have some reservations,” said Jerry Houghton, Tooele County recorder. “I want us to make an educated decision based on whether the prison benefits us. I don’t know what strings are attached or what the downsides might be.”

“My ‘yes’ is with conditions,” he said. “Because, as it has been presented to us, we don’t have any voice on any kind of committee that will be privy to the kind of information that the conditions for locating the prison will be based on.”

Nelson said he has his own reservations about putting a prison in Tooele County.

Earlier on Wednesday afternoon, Senate Bill 72, which creates an 11-member commission to oversee the process of relocating the state prison and development of the current prison property in Draper, passed the Senate Judiciary, Law Enforcement, and Criminal Justice committee with a 4-2 vote.

S.B. 72 will now head to the Senate floor. If the bill receives a favorable vote from the Senate it will then be sent to the House for consideration.

According to Sen. Scott Jenkins, R-Plain City, who is S.B. 72’s sponsor, the relocation and building of the new prison will cost between $500 million and $600 million. But over the course of 25 years, the economic development of the former prison site will put $20 billion into the Utah economy and create 40,000 jobs.