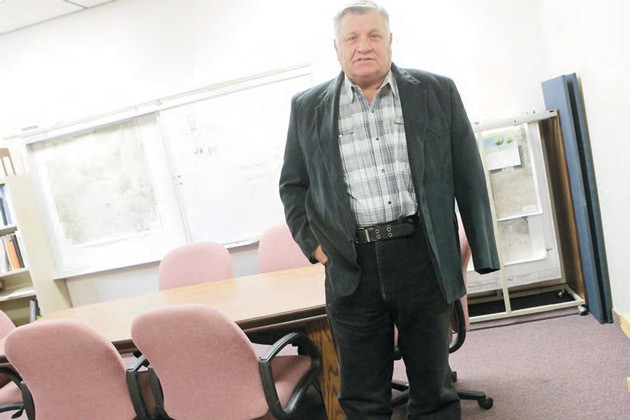 Tooele County Commissioner Bruce Clegg talks about the functions of the engineering department in their office Thursday morning. County officials are considering outsourcing some engineering work to private contractors.

A local engineering firm that employs the former Tooele County engineer, who was laid off last month, is among the companies bidding to provide the county with engineering services.

County commissioners eliminated the position of county engineer as a cost-cutting measure but retained the rest of the nine-member engineering department staff. Now they’re soliciting proposals to outsource some of the department’s functions — a move that would presumably mean more layoffs within the department.

“Contracting out for engineering and building services is something we want to look at and see if it will save us some money,” said Tooele County Commissioner Bruce Clegg, who oversees the engineering department. “We sent out a request for proposals and want to see what we get back before we make up our minds about what we want to do.”

The request for proposals was sent out Oct. 9 to nine different firms that had previously contacted the county and expressed an interest in providing engineering services, according to county planning division manager Kerry Beutler, who has been supervising the engineering department since former county engineer Vern Loveless was laid off.

Civil Proj-Ex, of Grantsville, which now lists Loveless as a project manager, was one of the companies sent a request for proposals. It responded with a bid to provide services.

The RFP asks for proposals from firms that can provide either engineering or building services or both.

The engineering services the county is looking to outsource include reviewing subdivision maps, site plans, parcel maps and construction plans for conformance with local and state laws; reviewing proposed grading, drainage, and improvement plans for private development; and recommending corrections and conditions of approval.

The county currently has five building inspectors that on a monthly basis average a total of 32 building permit reviews, 337 inspections, and 3,756 miles of travel for building services, according to the county’s request for proposals.

The county’s annual budget for building services is approximately $354,000, but that figure includes building services functions not being considered for outsourcing, according to Beutler. These include code enforcement, issuing building permits and certificates of occupancy, and maintaining project files.

Tooele County commissioners won’t make a decision about outsourcing building services until they review the proposals, which were due Tuesday, said Clegg.

“We need to look them over and see if we are really saving money and how much,” said Clegg. “If we do decide to outsource, we probably won’t start the contract until the new budget year in January 2013.”