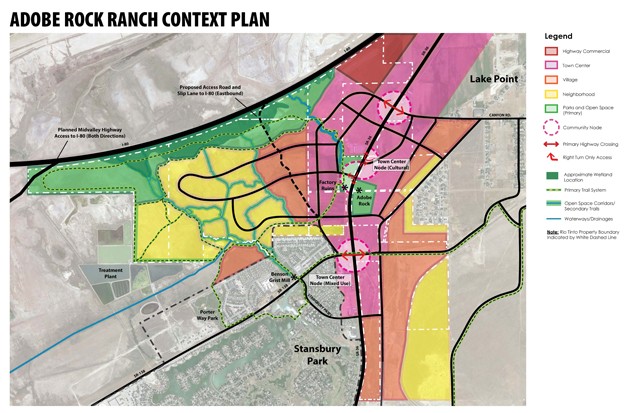 Tooele County’s Planning Commission wants more information before it makes a decision on the county’s first development to be approved under a planned community ordinance.

After an hour-long public hearing and discussion at its Oct. 3 meeting, the planning commission voted to review Kennecott Utah Copper’s application to rezone 1,444 acres between Stansbury Park and Lake Point on Oct. 17.

Kennecott submitted an application to rezone its property that runs from Interstate 80 west of exit 99 to east of state Route 36 by Adobe Rock. Its request was to designate the property as a planned community zone. The property is currently zoned for agriculture, manufacturing, rural residential and multiple uses.

After hearing citizens’ concerns about traffic, commute times, water wells drying up, and the infiltration of high density housing in rural areas, the planning commission pressed Kennecott’s representatives for additional information on the amount of open space, more certain plans for connections to I-80, state Route 138, and the Midvalley Highway. The planning commission also asked for more information on water and sewer service and a detailed traffic study.

In response Kennecott’s representatives pushed back a little.

“We are very concerned about what is going on in this community,” said John Birkinshaw, Rio Tinto Kennecott’s director of land planning and divestments. “The concerns that were raised tonight are our concerns, too. This I-80 problem is huge. The water problem is beyond huge. This county is one of the most beautiful places you’ll ever find, but it’s having a tough time surviving economically.”

Birkenshaw went on to say that Kennecott wants to work with Tooele County to solve some of these problems, including the pressure of growth. But Kennecott isn’t going to spend a lot of resources in a community where it isn’t welcome, he said.

“We are not going to expend resources if we don’t have any love in this room,” Birkinshaw said. “That’s kind of where we draw the line. If you want, we can help you think about I-80.  We are talking about regional issues here. You guys have a fiduciary responsibility to think about the long term. This is not tomorrow. This is not next week. These are big big issues. That’s our work and that’s the way we roll.”

As proposed, Adobe Rock Ranch would add 4,710 residential units to northern Tooele County in a variety of densities.

“The question is, as a member of the planning board, is this the type of development we want on that end of the county,” he said. “It doesn’t seem to make a hell of a lot sense. It’s not that I don’t know that we don’t need to have development on the north end, but it’s already plugged up in my opinion. I just have a really difficult time looking at this kind of situation and thinking it’s good for the county as a whole, as opposed to what’s good for a property owner that happens to own a bunch of acreage over there.”

The next Tooele County Planning Commission meeting is scheduled for Oct. 17 at 7 p.m. in the auditorium of the Tooele County Building at 47. S. Main Street in Tooele City.