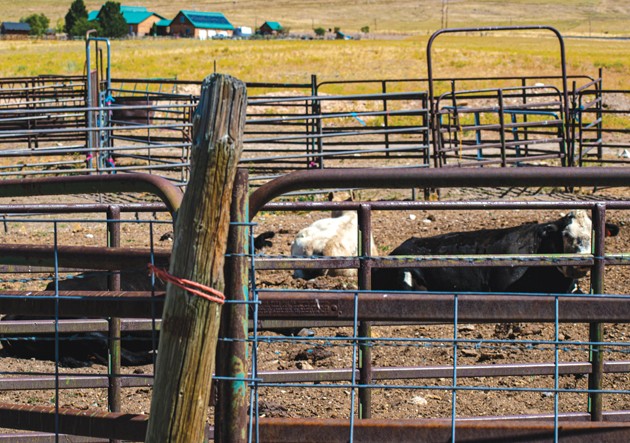 Cows relax on property in Erda on Wednesday afternoon. The Tooele County Planning Commission is considering changes to the county’s ordinance that regulates the number of animals allowed on property in residential zones in unincorporated Tooele County.

A proposal to regulate animals on “usable” acres instead of actual acres was dropped by the planning commission during their meeting Wednesday night.

The Tooele County Planning Commission took a second look at suggested revisions to the County’s land use ordinance regulating the number of animals allowed on property in rural residential zones during their meeting on Wednesday night in the Tooele County Building.

Trish DuClos, Tooele County planning staff, presented revisions from the draft reviewed by the planning commission during their July 15 meeting.

The revisions were based on feedback from the planning commission and comments received from the public hearing that was opened at the July 15 meeting, she said.

Among the changes were a definition of “animal unit” that allows offspring to be considered along with their  mother as one unit for a specified amount of time depending on the size of the animal.

An exception for exotic animals or reptiles was removed from the definition of a farm animal.

The words “non-commercial”  and “personal use only” was added to the “keeping of animals” phrase in the definition of personal agriculture.

The phrase “for the sole use of the persons occupying the premise” was dropped from the personal agriculture definition.

Usable acre was defined as “an area used strictly by the enjoyment of animals occupying said ground. Does not include landscaped areas and where houses, sheds, garages and similar buildings cover. Barns and stalls used by animals are considered in the usable acreage,” according to the proposed new code language.

In other parts of the code the word usable was inserted in front of acreage.

Commissioner John Wright explained that the term was needed so the amount of animals could be based on the actual acreage that could be devoted to raising and keeping the animals.

“You’ve just chopped a lot of 1-acre lots in half,” he said. “It’s not about grazing, almost nobody in Tooele County grazes their animals on lots this size. They bring in feed or hay. It’s about keeping them properly.”

Five out of seven members opposed the addition of the term usable acre. John Wright and Lynn Butterfield were the only two members of the planning commission that supported the new term.

Before he opened the public hearing, Jacobs told the public that the term usable acre would be withdrawn from the next draft.

Additional changes in the language included a provision for “grandfathering” to the old code of four animals properties and animals that existed before the new code changes are adopted.

The county can’t “grandfather” uses that are currently in violation of the county ordinance, DuClos said.

The revisions also include a provision allowing permits for animals over the limits for educational purposes, such as Future Farmers of America.

Current language in the County Land Use Ordinance defines personal agriculture as the “keeping of not more than four domestic farm animals or ten fowl for the production of food for the sole use of the person occupying the premises.”

That definition currently applies to multiple use, agriculture, and rural residential zones in unincorporated Tooele County.

In the proposed changes, in multiple use and agriculture zones property owners are allowed to self regulate the amount of animals on their property, as long as a nuisance, as defined in the County’s Land Use Ordinance, is not created on the property.

Jacobs encouraged the public to email their input to the planning commission at jcmiller@tooele.co.org.

Eventually the planning commission will end their recommended changes to the Tooele County Land Use Ordinance to the County Commission for final action.