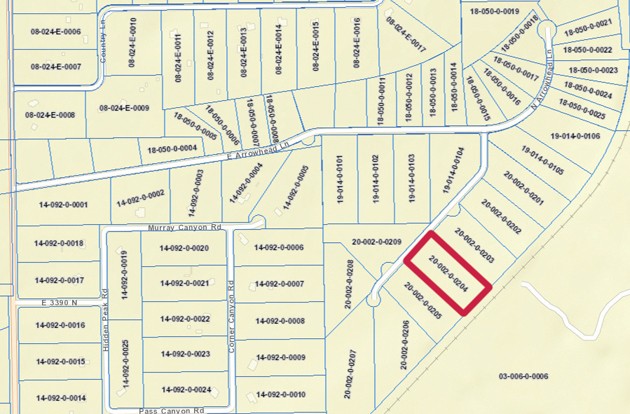 The Tooele County Planning Commission approved a conditional use permit for the highlighted lot.

A future Erda resident has been given the go ahead to operate an agricultural industry or business from her property in an east Erda residential neighborhood.

The Tooele County Planning Commission approved a conditional use permit Wednesday that allows a wholesale growing and distribution of cut flowers on a 5-acre lot on Moyle Lane.

The lot is in the Arrowhead subdivision, which is zoned RR-5, rural residential with a 5-acre lot minimum, according to a staff report.

During the planning commission meeting, Commissioner Lynn Butterfield corrected the report. He stated that the subject lot was located in the Arrowhead Phase II subdivision.

“In the RR-5 zone, agricultural businesses are a conditional use,” said Trish Waltz, Tooele County planning staff in the staff report on the CUP request.

County planning staff recommended that the CUP approval include, as a condition of approval, that the business be restricted to the growing and distribution of cut flowers.

They also recommended that the CUP include as a condition a requirement that when the flowers are harvested, shipments will be made during typical business operating hours of Monday through Friday between the hours of 8 a.m. to 5 p.m., with limited shipments on Saturdays as needed.

The planning commission opened a public hearing on the CUP and heard from two Erda residents and the applicant.

Ray Stewart said he owns property next door to the proposed flower operation.

“I have a number of issues with this,” he said. “I’m not against anybody having a business. I’m a businessman myself, but these people don’t live here and they want to start a commercial business in a residential neighborhood. First and foremost, that just cannot happen. I think if they live here, maybe we could revisit it.”

The applicant, Kindy Griffeth, said that she’s not planning a big business.

“There’s not going to be any traffic,” she said. “I just grow flowers. It won’t be any different from having a big vegetable garden. We have no special equipment, except a tractor and other people have a tractor. I will be cutting the flowers and making deliveries from the back of my pickup truck to local grocery stores or florists. It’s just a hobby and I want to recoup some of my expenses.”

The standard for reviewing conditional use permits requires a review of possible negative impacts and ways to mitigate those impacts.

Brent Bateman, lead attorney with the Office of the Property Rights Ombudsman, taught the planning commission in a training session four years ago that when uses are listed as conditional in a zone, it is saying it is OK to have these uses in the zone but it might require conditions to mitigate negative impacts.

If it is impossible to mitigate negative impacts, based on substantial evidence that is relevant and credible and standards found in county ordinance, then the conditional use permit could be denied, according to Bateman.

“It does not matter how many people line up to testify at public hearings to say ‘I don’t want this here,’ it is illegal to make an administrative land use decision, like a conditional use permit, based on public clamor,” Bateman said. “It takes a lot of work to ferret out substantial evidence from the emotional public clamor found in most public hearings.”

After the public hearing and discussion of the CUP among the planning commission, commissioner John Wright made a motion to approve the CUP with conditions.

Wright’s conditions included limiting the operation to wholesale cut flower growing and distribution with harvest shipments limited as recommended by the planning staff.

Wright also included additional conditions including no growth or production of marijuana or any plant or herb listed as a controlled substance and that the applicant apply for a building permit for a residence within four years of the approval of the CUP.

He also added to his motion that the operation may be expanded by 20%, including the greenhouse high tunnel, without further approval of the planning commission.

An amendment to limit the years to apply for a residence from four years to three years by Commissioner Butterfeld was approved.

Commissioner Ryan Sorensen added a restriction of no more than five employees to the conditions.

On a roll call vote, commissioners Butterfield, Sorensen, Wright and Scott Jacobs voted to approve the CUP with the listed conditions.

Commissioner Michael Pressley attempted to vote no, stating that detrimental effects such as traffic were not sufficiently addressed.

When pressed by planning staff member Jeff Miller to cite specific credible evidence of his concerns, Pressley chose to withdraw his vote.