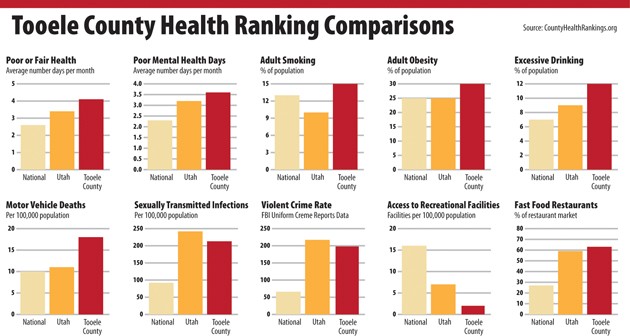 Report says county doing well in education and low violent crimes, but not so with health items like obesity, drinking and auto wrecks  ♦

Tooele County ranks as the 17th healthiest out of 27 counties in Utah, according to an annual national report.

The report used mostly public data gathered from a number of national data sources and surveys over several years. County rankings are based on several criteria divided between two categories: factors and outcomes.

Tooele County ranked No. 18 — one spot better than last year — in the health factors category, which includes subcategories like health behaviors, clinical care, social and economic factors and physical environment.

Jeff Coombs, deputy director of the Tooele County Health Department, said although the county’s smoking rate is higher than the state’s rate, it has been steadily declining over the past several years.

“We’ve had some extensive efforts in cessation and outreach,” he said. “We continue to work with schools on various programs for cessation and trying to prevent youth from developing smoking habits in the first place. We’re also continually working on restricting sales to youth by doing compliance checks with retailers that sell tobacco products. We feel like by affecting the environment, we will have the most success.”

County residents also drink to excess more, with 12 percent of residents reported as excessive drinkers compared to a state average of 9 percent and a national benchmark of 7 percent.

Lt. Jeff Morgan of the Tooele County Sheriff’s Office said the reason why the county’s motor vehicle crash death rate is higher than the state and national benchmark is because the county is home to more state highways and interstates.

“Over the last year I can’t recall but one or two fatalities we had on Mormon Trail Road, because my guess is that the majority of accidents for Tooele County must be out on I-80 or in the Lake Point area on SR-36,” he said.

Sexually transmitted infections are determined by the teen birth rates per 1,000 female population ages 15 to 19 and Chlamydia incidence rates per 100,000 population. STIs in the county were at 213, which is lower than the state at 242, but much higher than the national benchmark, which is 92.

Sherrie Ahlstrom, family and school health supervisor for the Tooele County Health Department, said according to the Centers for Disease Control and Prevention, the county’s rate of Chlamydia per 100,000 is just 1.7, while the state’s rank is 9.8 and the nation’s rank is 104.2.

Clinical care in the county was ranked No. 12 in the state, which is two spots better than last year. The amount of primary care physicians available to county residents is one for every 3,657 people. Utah’s average is one doctor for every 1,795 people. The national benchmark is one for every 1,067 people.

Tooele County’s social and economic factors were ranked at No. 8 — the category the county did the best in this year and last year.

The high school graduation rate in the county is 79 percent, while the state’s rate is 76 percent. There is not a national benchmark for this category.

“Most of our violent crimes occur in the summertime in our canyon areas,” Morgan said. “Usually when they occur it’s because we’re getting people crossing over into our canyons from other valleys. They come out and use our recreational areas for camping or other things. I’m betting that the reason we’re at the number we’re at is because of visitors from other valleys who come out to our county.”

In addition, drinking water safety, which was measured as the percentage of the population getting drinking water from public water systems with at least one health-based violation, brought Tooele County’s score down. The county’s percentage is 60 percent, while the state of Utah’s is 13 percent and the national benchmark is 0 percent.

Coombs said the county is limited when it comes to recreational facilities, especially during the cold winter months.

Coombs said the age group that has the biggest deficiency is young children — toddlers up to kindergarten age.

“Once they’re in school, they have activities and recess, but the preschool-age kids are very limited,” he said. “We received a small grant for $5,000 that’s purpose is to try to work with other agencies in establishing more opportunities for physical activity for young children. There’s not a lot you can do with that, but we can start doing some planning and collaboration with other agencies to make facilities available for that age group.”

The grant was awarded from the National Association of County and City Health Officials. Only two health departments in the nation received the grant.

In the health outcomes category, Tooele County ranked No. 17 — the same as last year. This number was calculated through the county’s premature death rate (represented by the years of potential life lost before age 75), the number of self-reported poor or fair health days, poor mental health days, poor physical health days, and low birth weight numbers. The county ranked No. 16 in premature deaths and No. 18 in the morbidity, or quality of life, category.

Coombs said overall, the county continues to do well in its employment rate, graduation rate and quality of life.

“All of that contributes to good health,” he said. “Also, our insurance coverage is way above the state and nation. That helps people with access to health care.”

Yet, Coombs said the county continues to struggle with obesity and nutrition.

“We’re starting to make progress in those areas,” he said. “For example, we’re getting ready to have the Live Fit [Tooele County Coalition] kick-off day on May 18. That day is focusing on good health, Those areas we’ve identified as top priorities will be addressed, like obesity, physical activity and diabetes. In response to our problems, there’s an effort we’re trying to make to tackle those problems.”