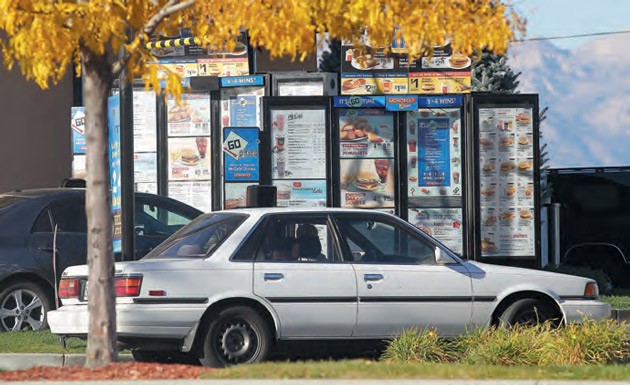 A car sits at the drive through menu at McDonalds in Tooele Thursday morning. City officials are trying to crack down on fast-food consumption.

Cracking down on fast food restaurants is one of several ideas a group of community representatives has come up with to decrease obesity locally.

Roughly 20 community representatives joined together at the health department Wednesday to discuss ways to get people to eat healthier as part of the Tooele County Health Department’s Community Health Improvement Plan. The county’s obesity rate is 30.7 percent — the highest rate in the state of Utah, according to the Centers for Disease Control and Prevention.

“We know we have the highest obesity rate in the state,” said Malaena Toohey, health educator and obesity prevention coordinator for the health department. “The obesity problem is two-fold with physical activity and nutrition. There are areas of improvement that need to be made in both nutrition and physical activity by improving the environment and educating people.”

Toohey said these improvements will start by studying the nutritional habits of county residents.

Patrice Isabella, Physical Activity, Nutrition and Obesity Program nutrition coordinator for the Utah Health Department, said those assessments could include going to restaurants to determine how many healthy options they provide or researching the location of “food deserts” — low-income areas with little access to grocery stores or healthy restaurants.

“It’s gotten a lot worse over the last 20 to 30 years,” she said. “Portion sizes are out of control and soft drink consumption is out of hand. We need to educate the public to make wiser choices against the bombardment. In order for us to give accurate info to county residents, we have to go out and do assessments so we can list where healthier options exist.”

Isabella said overconsumption of fast food can be a cultural problem. Possible solutions to that could include finding funding through initiatives like Healthy Food Financing — a federally-funded program that expands the availability of nutritious food to communities — to promote healthier foods or changing zoning through city ordinances that ban or restrict fast-food restaurants. Some cities in America that have zoned against fast-food eateries include Los Angeles and Detroit.

“You’ve got to look at fast food restaurants as bringing in tax revenue for the city,” he said. “I’m not saying the planning commission as a whole would or wouldn’t approve a zoning change, but that’s my opinion. It’s mainly because of tax base. We’re looking to keep the tax base up in the city.”

Isabella agreed that it’s hard to make zoning changes because there is a pro-business environment in Utah. However, she thinks it’s also important to make a statement for health.

“If we have 10 times more fast food restaurants than grocery stores, we need to make a change,” she said.

Toohey said most people understand that fast food isn’t the best option and educating them about other choices they can make is important.

“The approach we want to take is educating people about the good stuff that’s out there,” Toohey said. “We don’t want to necessarily focus so much on what not to eat, but more on what to eat.”

“I don’t know what we’d call the program — something like a healthier eatery award,” she said. “The restaurant could have a sticker on the window that shows they’re trying. We want to make it positive so they don’t feel like they’re being attacked, but we also want them to understand how they can help. Probably everywhere has at least one or two healthier options.”

Shayes White, personal trainer at Tooele Valley Personal Training, said hosting a meeting for restaurant owners to ask if they want to be involved in creating healthier options countywide would be a good idea.

“We could give them something that they can put up that shows they’re working for a healthier Tooele County,” she said. “If the restaurants stink, we need to tell them they stink, but we’ve got to dangle something in front of them that gives them an incentive to change.”

“I think we have to be careful,” she said. “There will be some restaurants that honestly, there’s nothing really there that’s healthy to eat. A needs assessment is good. We might not need to do one that’s so extensive and publishes results about which restaurants or stores are bad, but we need to do an assessment to know where our gaps are.”

Sherwood said the program could be completely voluntary, but would ask restaurant owners to mark their menus with the calories of their foods, and list some of their healthier options. She also said offering Tooele County residents some kind of guide that tells them what they should order if they’re eating at a Mexican restaurant or hamburger joint would be beneficial.

Toohey said overall the group’s plan is not to offend fast-food restaurant owners, but to work together to help county residents eat better.

“We don’t want to offend any business owners,” she said. “We want our plan to be a county-friendly one that’s in everybody’s best interest. We don’t want to tell fast-food places they need to get out of the county and we won’t get restaurants to quit serving fries, but if they’re willing to highlight things on their menus that are healthier, it could make a big difference.”