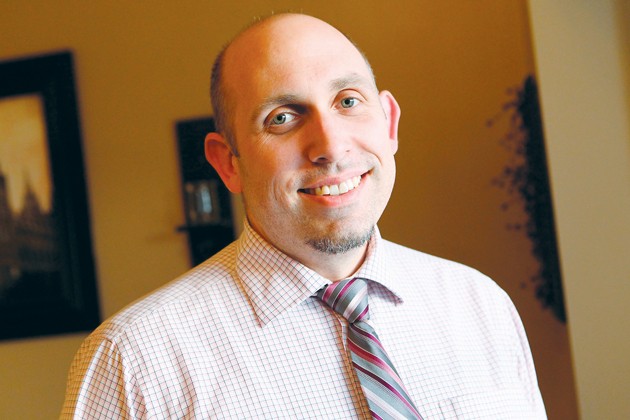 Erik Gumbrecht at his home in Tooele. Gumbrecht announced he will seek the party chair position at this weekend’s organizing convention for the Tooele County Republicans.

Tooele County Republicans are slated to hold their organizing convention at the Utah Firefighters Museum at Deseret Peak Complex this Saturday.

County Republican delegates elected at the 2012 caucus meeting will gather to vote for new officers for the party.

Chris Sloan, who has lead the party for two years, is not seeking another term as the county Republican party chairman.

“It’s time for somebody else to take the party to the next level,” he said.

Four years ago, Sloan was elected as county party chairman at a meeting of the Republican party central committee with eight people present.

Since that time he has dedicated the last two years to increasing involvement in the local party.

Sloan lead the party to a major victory in the 2012 election that left only one Democrat holding office in Tooele County.

Erik Gumbrecht, currently a state Republican party central committee member from Tooele County and former precinct chairman, is the only person that has announced the intention to seek the party chair position at the Saturday convention.

Four people have announced they will run for the two state Republican party central committee positions that will be selected at the convention.

In addition to the election for party officers and a vote on by-law changes, convention goers will hear from Congressman Chris Stewart and Lt. Governor Greg Bell.

The convention will start at 7 p.m. Saturday at the Firefighters Museum at the Deseret Peak Complex. The convention is open to the public but only delegates may vote.