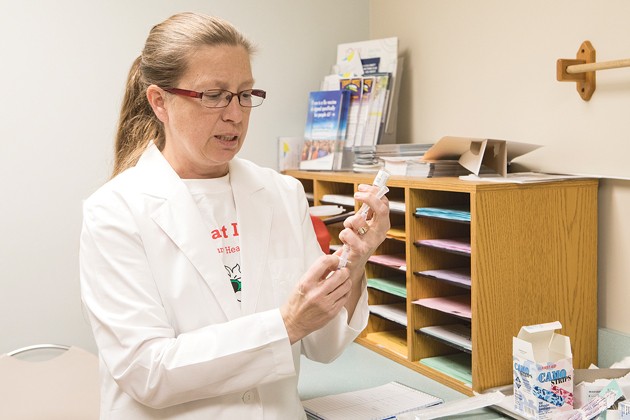 After a quiet start to the 2018-19 influenza season, the Tooele County Health Department is starting to hear reports of more than just a few local citizens getting hit with the flu.

It’s not an outbreak, but infection numbers are on the rise, according to Kendra Muir, family school health director for the county health department.

“We have some [residents] hospitalized because of the flu,” she said. At press time today, there have been no reportable flu-related deaths involving residents from the county or elsewhere in Utah, she said.

Muir said the health department is unable to provide a specific number on how many local residents are hospitalized because of HIPAA — the Health Insurance Portability and Accountability Act.

Muir also said influenza is not a reportable disease, which means hospitals and clinics are not required to report flu cases to health departments and the U.S. Centers for Disease Control and Prevention.

Making it further difficult to track the flu are residents who become infected, stay home and ride out the symptoms without seeing a doctor, she said.

“We’re right in the middle of the flu season where we start to see more cases,” Muir said. “But we don’t see this [local flu increase] as higher than any other year.”

Just 20 days ago, Utah made it onto a list of states across America that were seeing a high level of flu activity since Christmas, but Tooele County’s flu bug numbers were minimal, state data showed.

According to an influenza report issued last week by the Utah Department of Health, flu activity across the state was rated as “moderate severity.” However, a weekly influenza surveillance report dated Jan. 19 by the CDC ranked Utah’s flu activity currently as “low” yet “widespread.”

Even though the current flu season is in full swing, Muir said there’s still time to get vaccinated. When the 2018-19 flu season began on Oct. 1, the county health department campaigned heavily for citizens to get vaccinated by the end of the month by either injection or nasal spray, commonly known by the trademark name of FluMist.

According to the CDC, all citizens at least 6 months old through adulthood should be vaccinated by the end of October before flu begins to take hold in a community and continues through spring. Peak time for flu is December through February.

High-dose vaccinations for anyone 65 or older are also available. Self-pay is $58 per dose. It takes about two weeks after being vaccinated for antibodies that fight the flu to take full effect. The health department is located at 151 N. Main, Tooele.

Local health officials stress the importance of good hygiene to prevent the spread of influenza. Residents who feel sick are urged to stay home and to wash their hands often to prevent infecting others.

According to the CDC, flu symptoms include fever, cough, sore throat, runny or stuffy nose, body aches, headache, chills and fatigue. Some people, especially children, may have vomiting and diarrhea. People may also be infected with flu and have respiratory symptoms without a fever.

The CDC also reports that preventative steps — in addition to getting vaccinated — include avoid close contact with sick people, and to cover the nose and mouth with a tissue while coughing or sneezing. Afterward, throw the tissue in the trash and immediately wash hands with soap and water.

If soap and water aren’t available, use an alcohol-based hand rub instead.

Further preventative steps include avoid touching the eyes, nose and mouth, which are the main areas flu germs enter the body. Also clean and disinfect surfaces and objects that may be contaminated with flu germs.

For more information, call the county health department at 435-277-2301 or visit tooelehealth.org/flu-clinics/. More comprehensive information about influenza, prevention, treatment and the 2018-19 influenza season is available on the CDC’s website at cdc.gov.