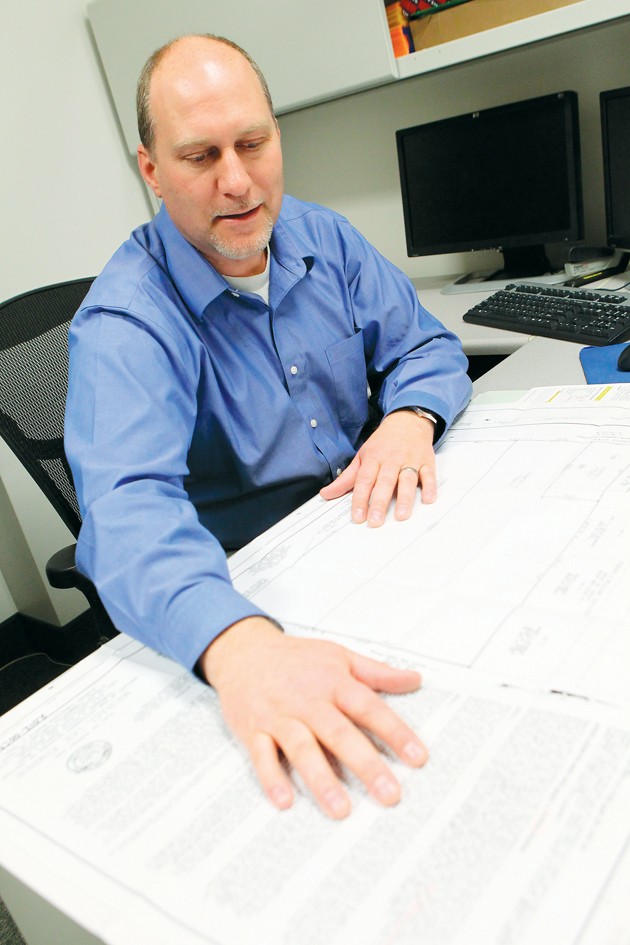 Doug Kinsman shows a plat in Grantsville Monday at his office in the county building. Approving plat maps is just one of several jobs a surveyor does.

Editor’s Note: This is the fourth of a continuing series on Tooele County Corporation’s offices and employees who serve the public.

The Tooele County Surveyor’s job is all about defining property.

Ownership of property is a fundamental right and the county surveyor’s office is a cornerstone of that right by providing the means to define pieces of land, according to Doug Kinsman, who was first elected as Tooele County surveyor in 2002.

The county surveyor, according to state law, maintains section monuments that are used as reference points for all surveys, keeps records of all boundary surveys completed in the county, and approves all plat maps for new subdivisions in the county.

In Tooele County the surveyor’s office is an elected position with the surveyor working part-time.

“It is important for the surveyor to be an elected office,” said Kinsman. “It maintains the independence and authority of the office. When it comes down to determining property boundaries, it is best that the surveyor be directly accountable to the people.”

An elected surveyor can resist pressure from other elected officials to have a survey reach a predetermined conclusion without the threat of unemployment that might affect an appointed surveyor, according to Kinsman.

All property surveys start with reference to a section monument, a reference point that is supposed to be fixed and permanent.

The surveyor’s job is to make sure these monuments are in the right place and remain undisturbed so they can be used accurately over time to measure property.

The Public Land Survey System, the national standard  system for measuring property, breaks up land into townships that are six miles by six miles square. Each township is further broken down into 36 one-mile pieces called sections.

Section monument markers were placed by early federal surveyors at the corner and mid-point of each section.

Originally monument markers may have been a large stone or a wooden stake surrounded by a mound of earth. Modern section markers consist of a pipe driven into the ground with a metal, often bronze, cap bearing information about the location of the section it marks.

These section markers form the foundation for defining all property boundaries and occasionally they may get removed or displaced.

“A contractor might accidentally disturb a monument when they are working on a site and not know it or not let us know,” said Kinsman.

There are 12 section monuments located along Droubay road where a contractor is currently replacing a Questar gas line. When they come across a monument that may have to be removed, they call Kinsman who can make sure the monument is replaced in the correct location.

Disturb a monument and you may have a problem with property boundaries that may not show up until years later when somebody goes to sell their property, Kinsman said.

Every surveyor that completes a survey to determine property boundaries is required to file a copy of that survey with the county surveyor.

These surveys are used to determine the legal description of property ownership that is then recorded by the county recorder.

Kinsman ties recorded surveys to property ownership records so people with interest in property can look up the surveys to see how the recorded boundaries were determined.

The recorded surveys are not only available in the surveyor’s office at the county building. Kinsman also has surveys available on the county’s online property records search.

Another statutory requirement of the surveyor’s office is to review all subdivision plats from the county and municipalities to make sure the survey work was done according to generally accepted survey standards.

Prior to the 2012 county budget reductions, the surveyor’s office employed the part-time elected county surveyor, one full-time staff surveyor, and a full-time survey technician.

The county surveyor’s office also participated with the school district with an internship program for high school students.

In the first round of county budget cuts in August 2012, Kinsman lost his staff surveyor and technician. A secretary that worked in the surveyor’s office left in 2010 and was not replaced due to a hiring freeze.

In 2012 the county contracted out some of the work for plat reviews, but the county commission has not renewed those contracts for 2013, Kinsman said.

The 2013 budget has been re-opened to find additional savings.

Kinsman said he has been working more than part-time hours to keep up with plat reviews and recording surveys.