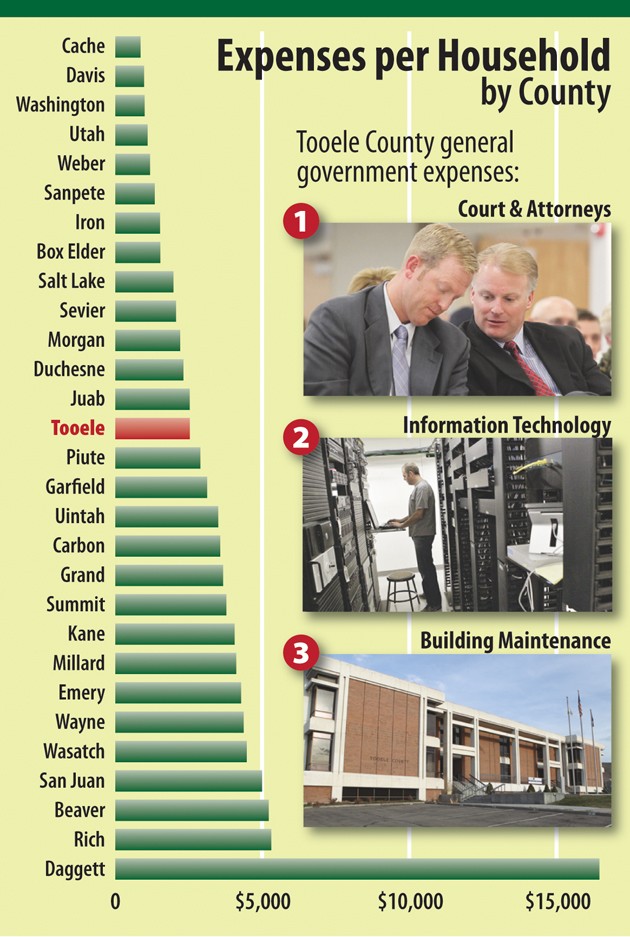 March 28, 2013
County’s household expenditures in the middle of the pack

While receiving the lowest general property tax revenue per household in 2011, Tooele County’s spending per household that same year is in the middle of the pack of Utah’s counties, according to state financial documents.

Tooele County’s general property tax revenue in 2011 works out to $105 per household, the lowest property tax collection per household in Utah, according to the most recent county financial statements posted on the Utah State Auditor’s website.

Also that year, the county’s expenses per household, not including construction and equipment purchases, was $2,521. That amount puts the county in 16th place among Utah’s 29 counties.

County expenses by household ranges from $16,406 in Daggett County, which is Utah’s smallest county, to $855 per household in Cache County, the sixth largest by number of households.

There are a wide range of variables in county budget including services provided, facilities, and total population.

If expenses for the Wendover Airport and Deseret Peak Complex are removed from the county’s 2011 expenses, the amount spent per household by Tooele County would have been $2,044.

The difference between the three counties’ expenses, after eliminating Tooele County’s expenses for Wendover Airport and Deseret Peak Complex, are in general government expenses, public health expenses, and interest and fiscal charges.

Public Health expenses show a large difference, however. Iron and Box Elder Counties are each part of multi-county health departments with a separate budget. Tooele County has a stand-alone health department with all revenue and expenses appearing on the county’s financial statements.

“We simply expend too much for how little we collect from stable revenue sources,” he said. “And, I believe, the recent economic trend proves that it simply isn’t feasible to use temporary one-time monies towards long-term expenses, such as capital improvements that require lengthy and hefty debt service payments or perpetual maintenance and personnel costs.”