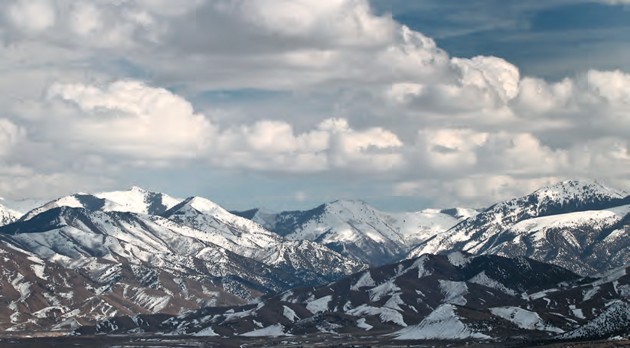 Clouds go over the Oquirrh Mountains Wednesday afternoon. Snow pack for the county is currently at 96 percent, which is average for this time of year.

Tooele County may be the only county in northern Utah that doesn’t have a dry summer because of its current snowpack numbers. “Tooele County got lucky this year,” said Randy Julander, snow survey supervisor at the Salt Lake Office of the Natural Resources Conservation Service. “It got big lake effect storms that gave the area a little more snow. We’re just tickled that somebody is having a good time.”

is at 95 percent of normal. Although these percentages have decreased in the last month, the county still has some of the best snowpack around.

“Tooele’s snowpack is the second highest in the state, but we like to call it the highest because the other area only has one measuring station,” said Julander. “That station is at Pine Creek in the Lower Sevier area. For all basins that have more than one site, Tooele is the highest.”

At local reservoirs, levels are lower than what he’d like to see, but Julander hopes March and April will help to increase the percentages. Currently, Settlement Creek is at 40 percent of capacity, Vernon Creek is at 33 percent, and Grantsville is at 36 percent.

“March and April should put quite a bit into those reservoirs,” he said. “We’d love to see them at 50 to 60 percent by now, but these are fairly small reservoirs and they typically fill in most years. The real key when you have small reservoirs is not whether you fill them or not, but how long they stay full.”

Julander said even if the county doesn’t get much accumulation during March, when the snowpack peaks around April 1, the county should still be in good shape.

“We’d like to have an outstanding March with one big storm each week,” he said. “We’d love to see rain in the valley and snow in the mountains, but we’ll take what we can get.”

The Climate Prediction Center’s forecast for the next three months predicts warm, dry weather for northern Utah. Yet, Julander isn’t too concerned.

“Even if you had slightly below average accumulation [in Tooele County] and your average was around 90 percent, we’d like what we see,” he said. “The rest of northern Utah is sitting at around 70 percent of normal right now, and it’s highly unlikely to get enough precipitation to overcome that. Our little shining jewel in the desert is Tooele County.”