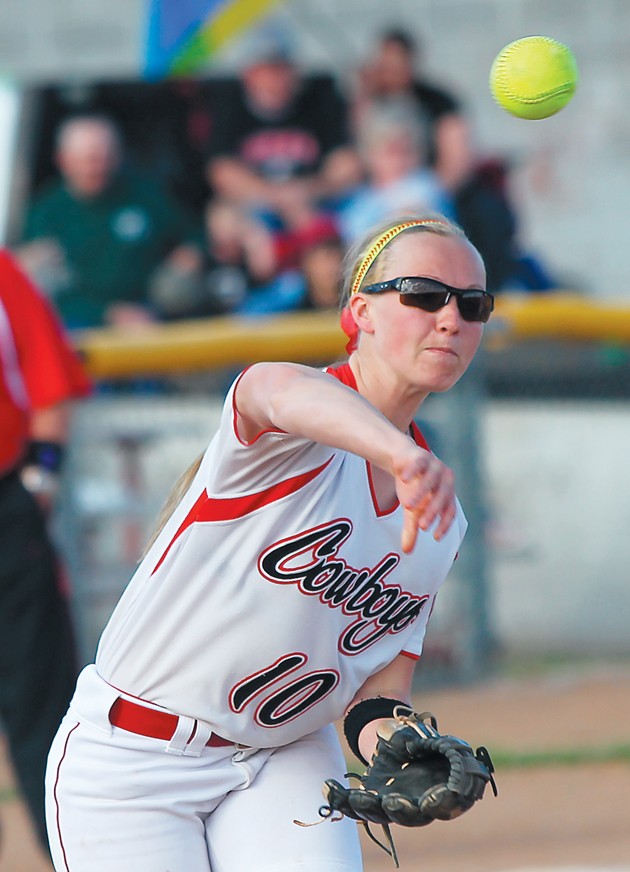 Maddie Johnson, Grantsville High School third baseman, throws the ball to first Friday against Bear River. The Cowboys rallied, but the Bears held on for a 4-3 region victory.

The Grantsville softball team rallied in the final innings but fell short in a 4-3 loss to Bear River on Friday.

Grantsville scored all three of its runs in the bottom of the sixth inning in the comeback attempt, trailing 4-0. Junior catcher Kolbi Jo Meno was hit by a pitch to start the inning, and sophomore Autumn Dzierzon came in to run for her as a courtesy runner. Dzierzon stole second base and came in under the tag on the throw attempt. Senior Maddie Johnson knocked a base hit, and Dzierzon kept running.

Grantsville coach Heidi Taylor held up the stop sign for Dzierzon, but she ran through it. Bear River’s catcher dropped the ball and the tag attempt at home, and Dzierzon slid in and scored to make the score 4-1. Johnson ended up at second base after the play at home. Senior Amy Matthews hit a ball right to second base, but the fielder threw it to third to try and get Johnson. She moved into third safely with Matthews at first.

Sophomore Kennedy Kelly pinch-ran for Matthews and stole second base to put both runners in scoring position. Sophomore Bailey Critchlow took advantage with a two-run triple to make the score 4-3.

However, Critchlow was caught in a rundown on the next play and thrown out. Junior Whitney Fields and sophomore Angel Cloward both struck out to end the inning.
Grantsville continued the comeback attempt in the bottom of the seventh inning. Junior Jamie Hamby reached first base on an error, but then she was called out on the next at-bat for leaving the base early when senior Teagan Critchlow made contact with the ball. Teagan Critchlow followed that play by reaching first base on an error. She then stole second base and reached third on a passed ball. But Bear River wrapped up the game with a flyout by Meno.

“I thought we played a good game, but a couple of missed plays here and there, and that scores [Bear River] three runs,” Taylor said. “They had three unearned runs off of just dumb bobbles. We know better. We just were lackadaisical.”

Bear River had runners on first and second base with two outs in the top of the second inning. Teagan Critchlow misplayed a ball hit to her in the outfield, and both runners scored to give Bear River a 2-0 lead. The third unearned run came in the top of the fourth with a runner on second base and two outs. Freshman Sarah Sandberg misplayed a ball in center field to score the runner from second and give the Bears a 3-0 lead. The fourth run came on an RBI double in the sixth inning.

Taylor said the biggest adjustment to make from Friday is to focus. She said her team isn’t in need of drastic changes, especially since it’s right in the thick of things for the region championship. She hopes to focus on the positive things her team accomplished and then make tweaks as needed so that things don’t spiral downward.

Grantsville doesn’t play another region game until April 10 against Stansbury, but it has a non-region road game today at 3:30 p.m. against Copper Hills.