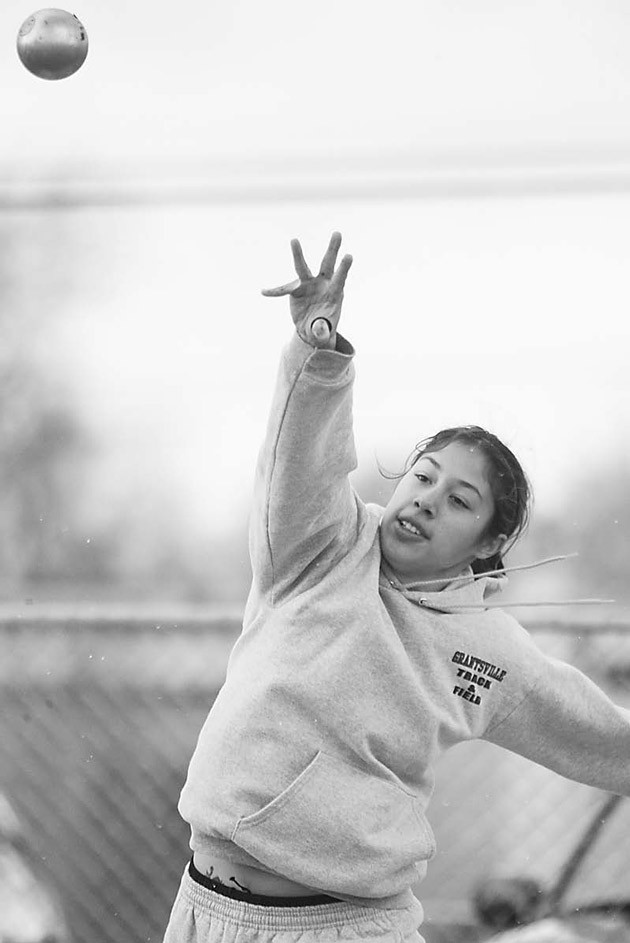 Grantsville’s Caroline Sekula unleashes the shot put in a meet earlier this spring. The Grantsville and Tooele High track teams are set to compete in the Region 11 Track & Field meet Wednesday and Thursday at Morgan. photography/Troy Boman

The victory should set the stage for a strong team standing headed into the Region 11 track and field meet slated Wednesday and Thursday at Morgan High at 3:30 p.m.

Grantsville powered to top team honors in the girls standings with 202.5 points to easily topple runner- up Juan Diego with 143 points.

Roy seized top team honors in the boys final team standings with 188.5 and Juan Diego was second at 158.

Grantsville fought to a third-place team showing in the boys competition of the Juan Diego Catholic Invitational track and field meet April 16 in Sandy.

Bleazard seized a silver in the long jump with a leap of 18-10 while teammate Kirk Donahue claimed seventh place in the event with a leap of 17- 4. Dugway’s Cody Stromberg took eighth place with a jump of 16-6.

The Cowboy senior also sprinted to a second place in the 200 meter dash with a runner-up finish of 23.92 in the event. Grantsville’s Butch Logan also claimed seventh place in the event at 24.56.

The Cowboys 1600 meter relay team of Shea Durfee, Logan, Kyle Glenn and Phillip Young claimed top honors in the event with a finish of 3:53.46. The Dugway relay squad of Jason Mathews, Josh McCarty, Josh Nelson and Stromberg joined forces to earn a silver time of 3:53.46.

The Grantsville medley relay of Ryan Blake, Danny Clayton, Josh Davidson and Sandberg also captured second place at 4:16.60 in the event as well.

Bleazard, Durfee, Davidson and Logan also joined together to take third place in the 400 meter relay at 46.94 while the Dugway team of Nick Eddy, Mathews, McCarty and Jake Wall took fourth place in 48.16.

Nathan Sandberg battled to a third place in the high jump with a bronze jump of 5-7.75 while Cowboy teammates Matt Hislop (5-3.75) and Casey Robinson (5- 1.75) also grabbed sixth and seventh place, respectively, to aid the Grantsville team tally.

Dane Schofield powered the Mustangs with a top toss of 155- 10 to win the javelin event and teammate Jake Wall was right behind with a fifth place heave of 130-3. Grantsville’s Brant Harris took sixth place at 128-3 and Dugway’s Taylor Schofield claimed an eighth place with a toss of 126-8.

Dane Schofield also grabbed sixth place in the shot put with a heave of 43-11.5 and Grantsville’s Brandon Rigby finished in eighth place at 43-8.25.

Shalane Titmus and Brooke Bunderson captured strong times and turned in outstanding individual efforts to lead the Cowgirls to the team crown April 9 at Delta. Titmus sprinted to the 100 meter dash in 13.51 to seize top honors in the event. The Cowgirl senior also raced to the 200 meter dash crown in 27.58 to provide valuable first place points to the Cowgirl squad.

Titmus, Bunderson, Jerica Dahlberg and Kellie Young combined forces to earn a silver in the 400 meter relay at 53.37 to record high team points as well. Bunderson and Titmus battled it out in the high jump. Bunderson vaulted 4-11 to capture a silver in the event while Titmus jumped 4- 9 to grab fourth place in the final standings.

Bunderson vaulted 15-10 to win the long jump and tally more team points for the Cowgirls.

The Cowgirl junior also fought to a fifth place in the 400 meter dash with a finish of 1:05.

Calli Steele uncorked a toss of 101-1 to seize third place in the javelin and teammate Mari Vera was right behind with a fourth place toss of 100-10.

Alexa Bakker battled to a fourth place time in the 100 hurdles at 18.14 and teammate Kalena Kartchner was right behind in eighth place at 18.69.

Felicity Silva unleashed a fifth place heave of 30-11 in the shot put and Ashley Puderbaugh garnered seventh place with a throw of 29-7.

Kartchner also grabbed eighth place in the 300 hurdles at 54.47.

For the boys, Phillip Young paved the way for the squad. The Cowboy senior powered to a fourth place time of 2:06 in the 800 meter run and later tacked on a sixth place finish of 4:51 in the 1600 meter run.

The Cowboys 1600 meter relay team of Brent Mouritsen, Butch Logan, Brian Graff and Young joined together to earn sixth place at 4:47 in the event.