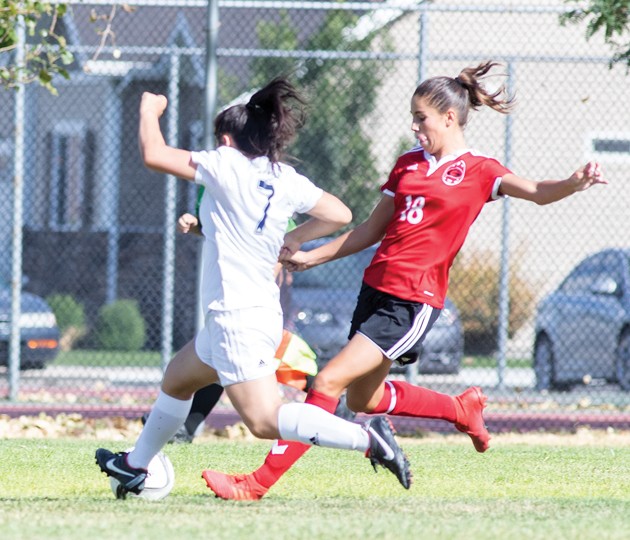 Grantsville’s McKenzie Allen (18) winds up for a shot as Providence Hall’s Lindsey Dean tries to stop her during Thursday’s Region 13 girls soccer match in Grantsville. Grantsville won 6-0, with Allen scoring a goal and assisting on another.

If the Grantsville girls soccer team is going to get where it wants to go this season, the Cowboys need to take care of business against the teams it should beat — particularly with the tough competition they have ahead.

On Thursday in Grantsville, they did just that, routing Providence Hall 6-0 in the first game of the Region 13 season.

Whitney Wangsgard scored four times for the Cowboys (6-1, 1-0 Region 13) and assisted on goals from McKenzie Allen and Alyssa Roberts. Elizabeth Whitworth also had an assist for Grantsville.

Wangsgard’s first goal of the game came in the fourth minute, and she added another one three minutes later after Autumn Barton lobbed a ball into the 18-yard box. The most impressive goal of the afternoon might have been by Roberts, who sprinted past a Providence Hall defender after taking a feed from Whitworth and scored in the 17th minute.

However, despite the early goals, Lowry thought the Cowboys could have played better in the first few minutes of the match.

“The first 20 minutes were pretty sloppy,” Lowry said. “The refs gave us a water break and we were able to say, ‘hey, let’s clean it up,’ and even though we had scored earlier than that, that’s when we started just controlling the game and never looked back.”

Allen scored in the 47th minute to put Grantsville up 4-0, and Wangsgard scored in the 50th minute on a breakaway. She added her fourth goal of the contest in the 53rd minute, though the Cowboys had multiple opportunities to add to their total as they hit the crossbar three times in the match.

Adalyn Enslen made four saves to earn her second shutout of the season and lower her goals-against average to 1.69.

Grantsville faced its toughest test of the season to date on Tuesday in Morgan. The match was not complete at press time. The Cowboys will return home Thursday to face South Summit.