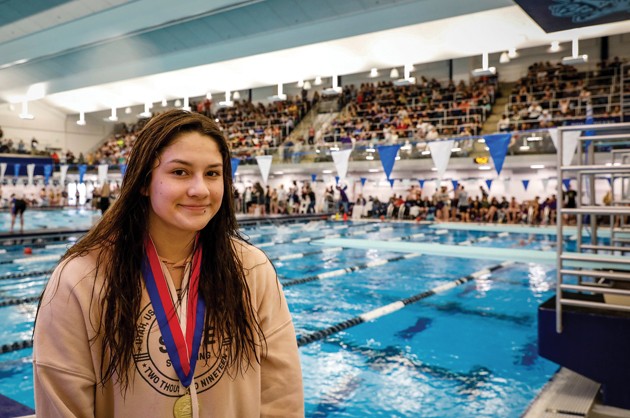 Grantsville’s Hadlee Begay stands with her gold medal from the 500 yard freestyle during the State 3A state swimming meet at the Richards Building on the campus of Brigham Young University in Provo, Utah on Sunday, Feb. 9, 2020.

There wasn’t much question whether Grantsville senior Hadlee Begay would find herself with more hardware from the Class 3A state swimming championship meet on Saturday at the South Davis Recreation Center in Bountiful.

There wasn’t even much doubt about what color that hardware would be. After all, Begay entered the meet a perfect 6-0 in individual championship heats in her career. All that was left to wonder was the size of her winning margin.

As it turned out, it was extremely close. Begay narrowly held off a late charge by Rowland Hall senior and Class 3A Female Swimmer of the Year Grace Smith in the final 50 yards of the 100-yard butterfly, recording a winning time of 1 minute, 0.63 seconds to Smith’s 1:00.75. That gave Begay her third career 100 fly title after she passed on the event a year ago in favor of the 200 freestyle (which she also won).

“We had a couple swim meets canceled, so it was hard not getting ranked in the top-50 at the beginning of the season,” said Begay, who led Smith by 0.41 seconds at the midway point of the race. “Toward the end, we started getting more swim meets, and this summer, it was hard for everyone to practice, so that was rough. I think my times were not as fast as they should have been, but it ended up working out anyway.

Begay won the eighth and final state championship of her high-school career later in the meet, though in considerably less-dramatic fashion. Her fourth career 500 free state championship came in a time of 5:30.57, comfortably ahead of Maeser Prep senior Kylie Hansen’s 5:35.37.

She said her strategy in the 500 free is fairly simple.

“Keeping yardage up in practice and focusing more on endurance — that’s something that not a lot of people have, and it’s hard to keep up with that,” Begay said.

Begay plans to continue competing for the Utah state team in USA Swimming, though she is undecided as far as her college plans are concerned.

“I think I was ready for the high school season to be over, but I’m glad that it ended the way that it did,” Begay said.