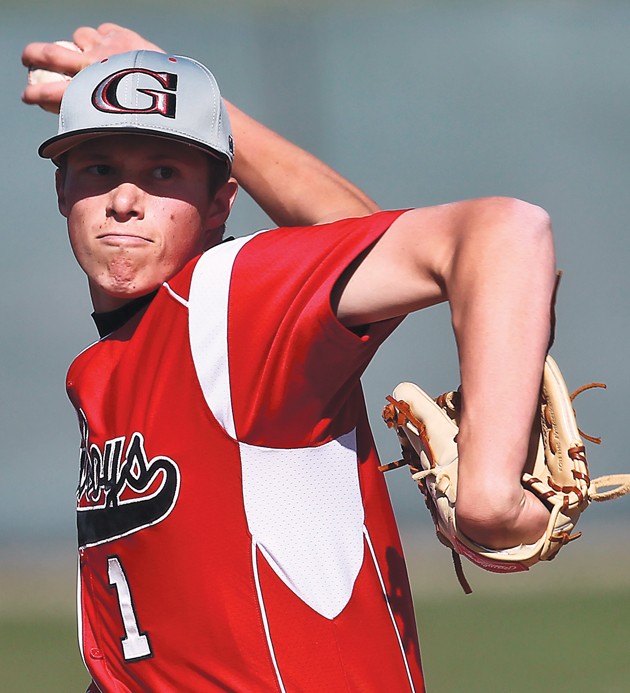 Grantsville worked on situation hitting in practice Tuesday, and it paid off in Wednesday’s game at Tooele.

“The thing I was most pleased with today was our hitting with a runner on third base with less than two outs. We’ve been getting runners there and leaving them stranded,” said Grantsville coach Loren Anderson.

The Cowboys left only a few players on base in a 13-4 victory over Tooele. Grantsville out-hit the Buffaloes 15-7, and when they advanced runners to third base with less than two outs they made sure they scored with a base hit or sacrifice out.

“In those situations what we have to do is get the run in. Players don’t have to go up and try to hit the ball out of the park, they just need to hit it and get the runner home,” Anderson said.

After scoring zero runs in the first inning, the Cowboys scored in every inning the rest of the game. Grantsville scored two runs the second, one in the third, one in the fourth, three in the fifth, four in the sixth and two in the seventh.

Tooele sliced Grantsville’s lead to 4-1 in the bottom of the fourth, but the Cowboys blew it wide open with nine runs in the final three innings. 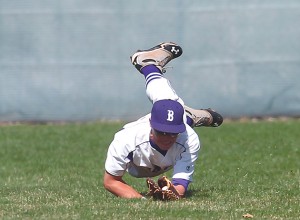 Tooele High School’s Zach Jeffers dives to catch a ball in the outfield Wednesday against Grantsville.

Landon Hammond pitched a complete game for the Cowboys and ran his record to 5-0 on the season.

“Landon threw a good game. He got the ball up and missed some pitches late in the game and our defense gave up some errors in the sixth. We just had a big inning at the plate in the top of the inning and relaxed a bit on defense. You can take that in a game when you have a big lead, but if you do that against good teams in a tight game they’ll make you pay,” Anderson said.

Grantsville opened the scoring in the top of the second when Manny Begay singled followed by a long double to the left field wall by Quinton Smith. Nick Arbon smacked a sacrifice fly to score Begay. Hammond singled to left and Dalen Williams drilled a sacrifice fly to center field to score Smith with a second run.

Kelby Landon ripped a double to the right-center gap to open the third inning. Ky Fisher ripped a single to third to score Landon. Tooele pitcher Braden Furgeson retired the next three Grantsville batters to limit the damage, but Grantsville led 3-0.

A Tooele error helped Grantsville get a fourth run in the top of the fourth. Grantsville’s Smith reached on an error, and later scampered to third base on an overthrow. Smith trotted home when Hammond singled to left field to make it 4-0.

Tooele finally made some offensive noise in the bottom of the fourth. Tyson Vigil cracked a shot over the center fielder’s head for a lead-off double. Hammond struck out the next two Tooele hitters, but Furgeson came through in the clutch with a single to right field to slice the Cowboys’ lead to 4-1 after four complete.

Grantsville blew the game open with three runs in the top of the fifth to grab a 7-1 advantage.

Fisher singled, Cloward walked and Wyatt Barrus helped moved Fisher to third with a sacrifice fly. Begay helped score Fisher with a sacrifice fly followed by a single from Smith to score Cloward. Grantsville scored a third run in the inning when Nick Arbon singled up the middle to score Smith.

Tooele countered with one run in the bottom of the fifth. With one out, Brendan Walker singled up the middle. With two outs and Walker at first, TJ Bender ripped a shot down the right field line for a double to move Walker to third base. Walker scored on a Grantsville error to make it 7-2. 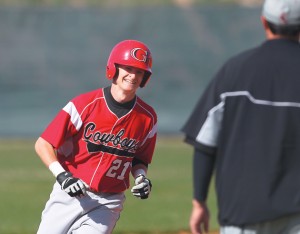 Grantsville High School’s Dalen Williams smiles as he rounds third base after knocking a home run over right field Wednesday. Williams’ home run was one of 15 hits the Cowboys accumulated in the win against Tooele.

The Cowboys extended the lead to 10-2 with three more runs in the top of the sixth.

Dalen Williams started the inning with a home run over the right field fence. Landon singled, Fisher laid down a bunt single and both runners ended up at second and third with nobody out after stolen bases. Brayden Hamatake smacked a two-run single up the middle to push Grantsville’s lead to 10-2. Smith came through with a sacrifice RBI to run the lead to 11-2.

A pair of Grantsville errors in the bottom of the sixth helped Tooele score twice to make it 11-4.

Tristan Prather started the rally with a one-out single to left, and Furgeson reached on an error. Nick Swartzman was hit by a pitch, and Prather and Furgeson ended up scoring on some bobbled balls by Grantsville infielders.

Grantsville pushed the lead to 13-4 with two more runs in the seventh. Dillon Hutchins walked, and Williams singled to right. Both Hutchins and Williams scored being pushed around the base paths on sacrifice balls hit by Fisher and Cloward.

Tooele will play at Ben Lomond on Tuesday. With the win over the Buffaloes, Grantsville ran its region record to 4-1 and 11-1 overall. Tooele is 1-3 in region play and 2-9 overall.