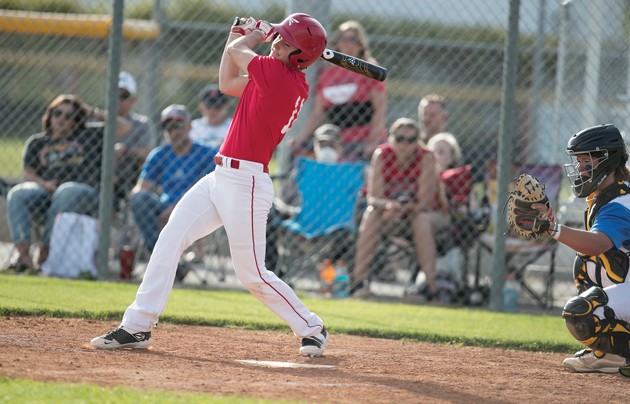 Grantsville’s Zach Hale tries to catch up with a pitch during Friday’s summer league baseball game against Cyprus in Grantsville. The Cowboys faced Brighton in a summer-league game Wednesday evening in Cottonwood Heights.

As one of the smallest schools in Salt Lake County’s summer baseball league, Grantsville faces an uphill battle most of the time against Class 5A and Class 6A competition.

Still, the Cowboys hoped for a little more success than they had seen going into Wednesday’s road game against Brighton in Cottonwood Heights — while the younger Varsity Prep squad was undefeated and had dominated its first four games of the season, the varsity team was winless. Thanks to a dominant pitching performance from Logan White and Josh Staley, along with some timely hitting from a young lineup, Grantsville is winless no more, beating the Bengals 7-3 in a game that might not have been as close as the final score would indicate.

“Some of our young kids got in and got some big hits, so that was exciting,” Grantsville coach Aaron Perkins said. “I’ll be honest with you — just watching these kids (Wednesday night), it got me real excited for the (high school) season. I feel like we’ve got a good mix of younger and older kids coming back, and we’re going to be pretty good.”

The Cowboys (1-3) built a seven-run lead over the first four innings and cruised from there, with White shutting down the Class 5A Bengals with an efficient performance. All three of Brighton’s runs were unearned, coming as a result of three Grantsville errors in the fourth and fifth innings. White gave up just four hits and two walks with four strikeouts in five innings before Staley finished the job with two scoreless, no-hit innings of relief.

“The thing is, we need guys to come in out of the bullpen and throw innings. That’s high school baseball — you’ve got to have guys come in and eat innings up out of the bullpen. If you can have guys that throw strikes, and Josh did that, that helps.”

The Cowboys’ offense gave White plenty of run support. Grantsville took a 1-0 lead in the top of the first after Caleb Sullivan drew a leadoff walk and scored on Kaden Kelley’s one-out RBI single down the left-field line.

GHS added three more runs in the third inning. Sadiq Gotiear singled through the left side of the infield, Sullivan bunted for a single and Staley was hit by a pitch to load the bases. Kelley drew a walk to drive in Gotiear and Jackson George followed with a two-run single to right-center to put Grantsville up 4-0.

“We had a lot better approaches at the plate than we had the other day,” Perkins said. “I think the kids were a little more focused at the plate and we executed some really good bunts in key situations to move runners.”

The Cowboys racked up another three runs in the top of the fourth without the benefit of a single hit. Tyson Hainke was hit by a pitch to lead off, then was safe at second on Gotiear’s groundball when Brighton committed a throwing error. Sullivan walked to load the bases, and Staley was hit by a pitch for the second consecutive plate appearance to score Hainke. Gotiear scored from third base on a passed ball to put Grantsville up 6-0, and Sullivan came home on a sacrifice fly to center by George, which brought a cheer from a sizable contingent of Grantsville fans who made the drive from Tooele County.

“We have to do that as a program — we have to move runners and bring those runners in when we get opportunities,” Perkins said.

“We want to thank all the fans for coming out and watching. We have great support in Grantsville. It’s a summer-ball game and we’ve got fans out there, and it’s awesome.”

Kelley finished 2-for-3 with a walk and two RBIs, while George was 1-for-3 with three RBIs. Sullivan was 1-for-2 with two walks, a stolen base and three runs scored from the top spot in the Cowboys’ lineup.

With their first victory under their belt, the Cowboys will hit the road again Friday to face Class 6A powerhouse Herriman. They will be back on their home field to face Olympus on Monday at 6:15 p.m., with a road game Wednesday at 7:45 p.m. in Magna against Cyprus.

“Herriman’s good — they have some arms and it’ll be a challenge for us, but we like playing those games,” Perkins said. “They’ve put it on us the past couple years. We’ll see as good of arms as we’ll see all year on Friday and it’s good to see that.”