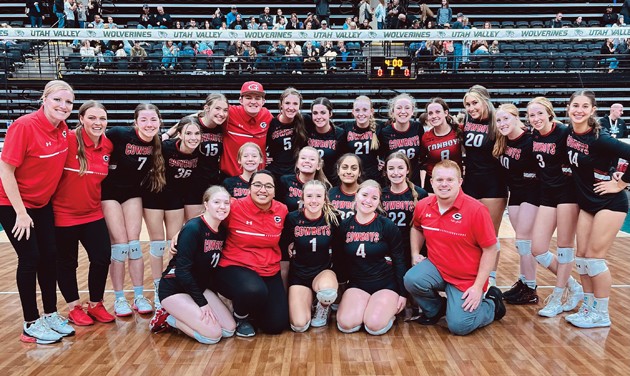 The Grantsville HIgh School volleyball team, following its 6th place finish during the 3A state tournament.

For the first time since 2008, and only the second time since moving up to 3A in 2001, the Grantsville High volleyball team placed at the state tournament and won a record 22 games.

After a disappointing opening round loss, the Cowboys rallied and won three straight games to earn sixth place and end their season with a huge victory. Seniors Brylee Castagno, Kaitlyn Nordgren and Emily Ware led the team with strong performances throughout the tournament to end their high school careers on a high note.

“I am so proud of the seniors. They are amazing examples in every way possible. They are fantastic students who drive to be their best in the classroom. They are awesome volleyball players who worked hard to accomplish big goals for Grantsville High School volleyball. And they are, most importantly, wonderful examples with the love they show and how kind they are to others.”

“ The girls never got down on themselves and played aggressively [against Canyon View], did what they needed to do to finish the set and ultimately win the game,” Fisher added. “I loved that the winning point came from a kill by Emily Ware. She has made such a huge impact on the GHS volleyball program and was so happy she was able to finish the season off for us to get the W and 6th place.”

In addition to the seniors, a talented cadre of juniors and sophomores played tremendous roles for the Cowboys. Juniors Aliyah Fernandez, Ava Kelley and Sierra Nickell along with sophomores Avery Allred, Brooklyn Berrett, Ranae Rounds, and Eliza Smith all starred at different times to contribute to Grantsville’s most successful season in years.

The team made some adjustments and rebounded to take sets two, three and four, 25-18, 25-33, 25-22. This victory, along with the comeback with over Delta the night before were especially satisfying as they avenged first round state tournament losses to Delta in 2018 and Carbon in 2019.

The Cowboys went into the game with a 1-1 record against the Dinos this year.

“After a tough start, the girls regrouped and toughened up their serving and defense,” Fisher said. “They were so scrappy, and we could tell it was frustrating Carbon by making it extremely hard for them to get a ball down.”

“Although they got down big in the 4th set [13-18], just like they’ve done so many times this season, they fought back to take the W. These girls don’t quit, and I hope they remember these lessons for the rest of their life.”

No comeback in the tournament could compare to the Cowboys rally from down 5-11 in the fifth and deciding set to Delta on Friday night. After losing to Manti 0-3 in the opening game 12-15, 16-25, 12-25, Grantsville came back with strong motivation in the first two sets against Delta, one of the two teams to beat them at home this season, and won 25-20 and 25-17. Delta fought to stave off elimination and won sets three and four, 17-25 and 19-25. In the fifth set, it appeared that the Cowboys would be going home early when they were down 5-11, but the team dug deep and point-by-point came back to take the set and match 17-15.