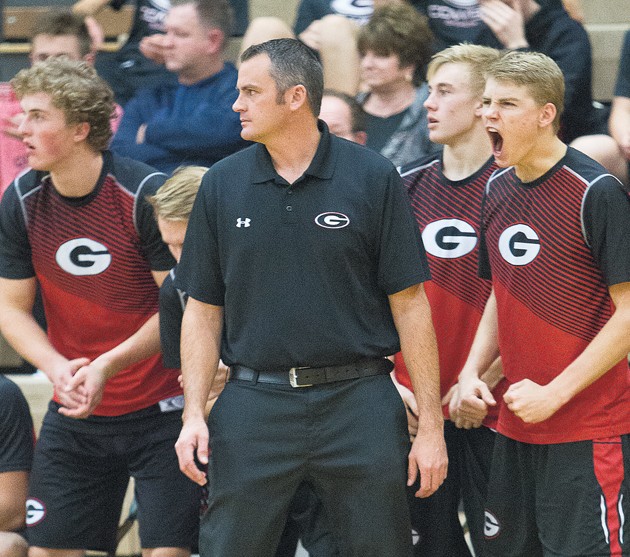 Head coach Bryan Detweiler (right) instructs Cowboy players at a practice last season. Perhson took over head coaching duties for four games this season as Detweiler and his wife welcomed a new baby into the family. Grantsville High School’s associate head basketball coach Brandon Pehrson (above) coaches from the sidelines at the away game against Kearns earlier this month.

Grantsville head basketball coach Bryan Detweiler has been missing in action for the past week or so, but not without a good little reason.

He’s just welcomed a new baby into the family.

“Everyone is great,” he said in a text sent from the hospital.

“It’s fun, we’ve got a good support system,” Detweiler said in a phone call Monday. “It’s really fun with me and Ash, it’s precious. You look down and [Harper]’s two weeks old and she’s grown already.”

While the head coach spent valuable time with his young family, associate head coach Brandon Pehrson handled the basketball duties at Grantsville. The Cowboys went 1-1 in Detweiler’s absence, beating a scrappy West Wendover team 66-56 at home and falling 67-53 on the road to Kearns on the Wednesday and Friday after Harper’s birth.

Pehrson was sure to keep the Cowboy players working hard while Detweiler was elsewhere.

“He’s the head coach, he’s key to this team. It’s hard to have him gone,” Pehrson said following the West Wendover game. “We’re a team, we fulfil different roles. So when he’s gone, we’re not as good as when he’s here. But he and I communicate, and we stay on the same page. One thing about Bryan and I is we’ve been together [as Grantsville coaches] for three years. We see eye to eye on many things. That’s a sign of a good head coach, that the program can keep going and be efficient when he’s not here.”

Pehrson temporarily taking the helm isn’t exactly a new thing for Grantsville, as he took the team to southern Utah earlier this month, splitting action in the 3A Preview with the win over Juab and the loss to Desert Hills.

“It’s different, I’ve never ran so much in my life,” Grantsville senior center Trevor Colson said. “We’re used to it, so I think it was pretty much [business as] usual.”

Detweiler said he’s set to return to the team as Grantsville takes part in the Utah Autism Holiday Tournament at Olympus High School from Wednesday through Saturday.