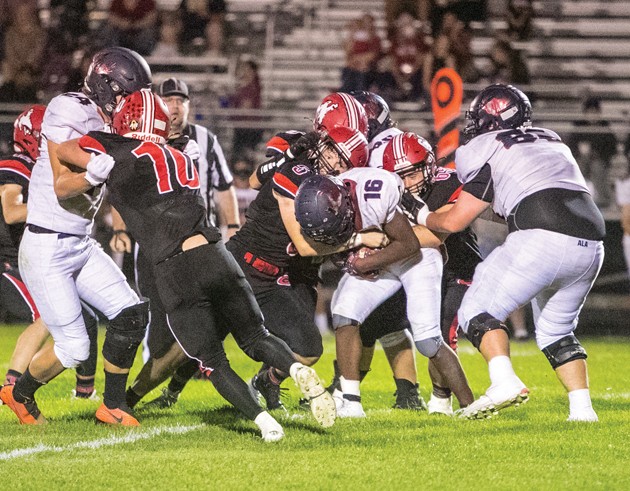 Grantsville’s Gabe Mouritsen (5) and Kai Tanaka (65) team up to bring down American Leadership running back Tad Swarnes. Grantsville’s defense has been superb all season.

September 14, 2021
Cowboys celebrate homecoming with victory over ALA Eagles

Grantsville wrapped up its five-game non league schedule Friday with a 35-6 victory over American Leadership Academy in a Homecoming game.

After close losses to a pair of unbeaten powerhouses Provo (5-0) and Beaver (5-0), the Cowboy have reeled off three lopsided victories over Manti (42-14), North Sanpete (27-0) and ALA.

The first RPI rankings were released on Monday and the Cowboys are listed as the top team in 3A followed by Juab, Juan Diego, Morgan and North Sanpete.

“It was a pleasant surprise; I don’t really know what the team thought of it. We just can’t get complacent though,” Byrd said.

“We’ve played really well. The games against Manti and ALA were good in a sense because it gives our JV guys some live reps and gives us a chance to rest some of our players,” Byrd added. “We’ll have some tough games coming up.”

The coach said Ben Lomond has a few skill players they will need to contend with. The Scots picked up their first win last Friday against 2A Judge Memorial (0-4) 28-0.

Grantsville scored three first-quarter touchdowns on a 6-yard run from Blake Thomas, 89-yard run by Gabe Mouritsen, and a 43-yard pass from Sullivan to Ethan Rainer.

The Cowboys rushed 26 times for 223 yards for an average of 8.6 yards per carry. Johnson ran eight times for 50 yards and one touchdown, Thomas six times for 67 yards, Sullivan five times for 16 yards.

Mouritsen’s one carry went 89 yards for a touchdown. Sophomore Conner Horrock rushed one time for 16 yards.