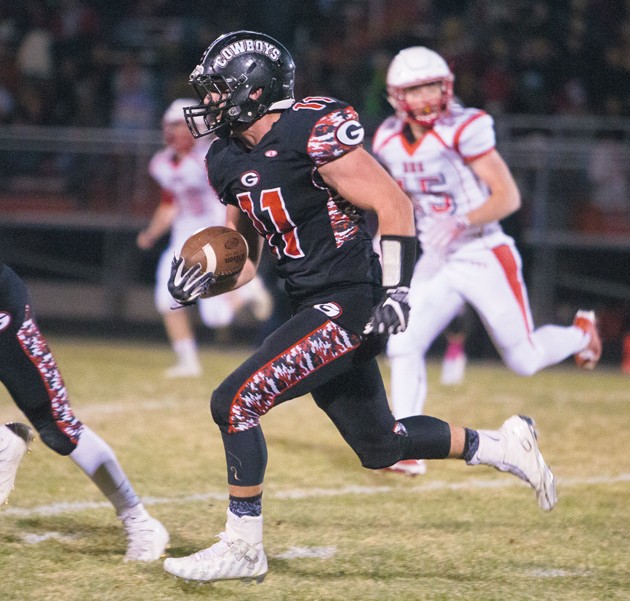 When the 2016 season began, the Grantsville football team had the modest goal of returning to the postseason after winning just four games over the previous two campaigns combined.

The Cowboys more than accomplished that goal, finding themselves in contention for the region title going into the final week of the season. And as the postseason begins Friday, Grantsville can dare to dream big.

It is rare in high school sports, particularly in small-town Utah, that the postseason begins without a clear favorite –– but that’s exactly what’s happened in Class 3A football this year. There are a half-dozen decent-to-good teams in the bracket. None of them could be considered great, as evidenced by top-ranked Morgan laying an egg in last week’s regular-season finale against non-playoff team North Sanpete and Juan Diego’s surprising loss at Canyon View. Morgan also lost earlier this season to South Summit, which led some to wonder whether Class 2A is actually stronger than Class 3A this season.

Grantsville finds itself in a group of solid squads that all have championship aspirations. The Cowboys dropped the region finale 17-14 at Morgan in a game that Grantsville dominated except for a few crucial mistakes in the first six minutes and nearly completed an impressive comeback attempt at Juan Diego. The Cowboys’ first-round playoff opponent, Delta, beat Grantsville in the season finale, but it’s hard to know how much can be taken from that result, as neither team wanted to reveal too much.

The Rabbits have a legitimate shot at the state title as well — if they get past the Cowboys. Delta finished second in the southern region and won’t be an easy out by any stretch of the imagination.

(As an aside — does any mascot say “ferocious” quite like a rabbit? Is this the rabbit from “Monty Python and the Holy Grail” we’re talking about? Or a diabolical version of Bugs Bunny?)

A showdown with Morgan in the semifinals is the likely reward for the winner of Friday’s Grantsville-Delta game, though the Trojans have shown themselves to be a flawed squad themselves. Morgan’s first-round matchup with Manti is no walk in the park, as the Templars gave Juan Diego all it could handle earlier this season.

The other side of the bracket pits Juan Diego against Canyon View and Juab against Emery. Juab might be the most underrated team in the field despite going undefeated in region play to win the Class 3A South crown, while Emery finished fourth in Class 3A North and is clearly a level below Morgan, Juan Diego and Grantsville.

Meanwhile, Juan Diego might be the most overrated team in the tournament. Sure, the Soaring Eagle has the whole private-school, defending-state-champion mystique going for them, but their talent doesn’t seem to match the hype as much as it has in previous years. And while they probably didn’t show much against Canyon View last week in Cedar City, the Falcons will be brimming with confidence as they make the trip to Draper this week.

Are there any teams in the Class 3A tournament that don’t have a legitimate shot at the title? Emery and Manti are the least likely to survive the first round simply because of their tough matchups, but then again, both are Class 2A schools that play 3A football.

But among the other schools, anything is possible.

And “anything” includes the championship trophy finding its way back to Grantsville for the first time this century.

Darren Vaughan is the community news editor for the Transcript Bulletin. The only thing he doesn’t like about postseason football is when it gets so cold he can’t feel his feet. Email him at dvaughan@tooeletranscript.com.