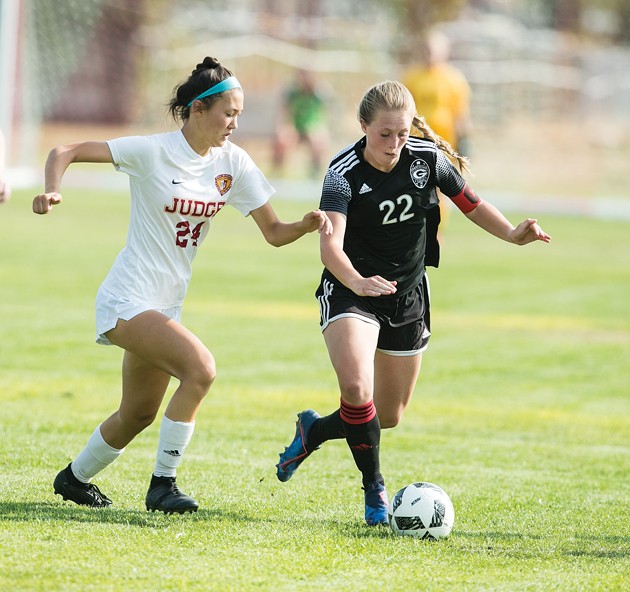 Grantsville senior Whitney Wangsgard (22) works her way past Judge Memorial’s Sarah Bowler during a Region 13 girls soccer match on Sept. 17 in Grantsville. Wangsgard scored six goals as the Cowboys defeated Summit Academy 9-1 on Tuesday in Bluffdale, giving her 46 goals this season and 187 in her career.

Grantsville improves to 4-1 in region ♦

Thunderstorms in Bluffdale delayed the start of Tuesday’s Region 13 girls soccer game between Grantsville and Summit Academy, but once the game got under way, it was the Cowboys’ offense that struck again and again.

Grantsville routed the Bears 9-1, responding to an early second-half burst by Summit Academy to finish the game with five goals in a span of 18 minutes. Whitney Wangsgard scored four of her six goals after halftime in the blowout win for the Cowboys (8-3, 4-1 Region 13). McKenzie Allen scored a pair of goals and Hannah Gardner added another for Grantsville.

Grantsville coach Travis Lowry said the Cowboys were testing out their strategy on Summit Academy’s artificial-turf field, given that GHS will have to face Judge Memorial on turf later this season.

“We worked hard this week to try to help us on the turf,” Lowry said. “We had pretty good control, I felt. We did some different formations at times to try to overload the midfield and I think it worked a few times. We’ve got two good forwards (Wangsgard and Allen), so that doesn’t hurt.”

The Cowboys used the speed of Wangsgard and Allen on the faster surface to get behind the Bears’ defense. It took less than four minutes for Grantsville to capitalize, as Wangsgard lobbed a ball over the top of Summit Academy’s back line and sent Allen in on a breakaway. The Cowboys’ sophomore forward easily tucked the ball into the net for a 1-0 Grantsville lead.

Gardner added to the lead in the 23rd minute off a scramble at the top of the 18-yard box, as Emily Adams made a pass to the left side and found Gardner wide open. Five minutes later, it was Wangsgard’s turn to score, as she took control of a lob and maneuvered her way through the Bears’ defense.

Wangsgard’s second goal of the afternoon came off a pass from Allen in the 38th minute, giving Grantsville a 4-0 lead at halftime. But Summit Academy (3-6, 2-4) gained a bit of momentum just after play resumed, as Olivia Young converted on a long free kick to cut the Cowboys’ advantage to 4-1. Two minutes later, it appeared the Bears had pulled within two goals when Ella Christian put home a rebound off another free kick by Young, but Christian was ruled offside and the goal was disallowed.

The brief scare seemed to light a fire under Grantsville, which poured it on from there. Wangsgard took a pass from Elizabeth Whitworth and beat a Summit Academy defender one-on-one for her third goal of the game in the 50th minute, and added another tally three minutes later on a feed from Callie Carlsen.

“It’s a funny thing — they try to foul (Wangsgard) and they try pushing her, and it just makes her mad,” Lowry said. “Then she’s like, ‘OK.’ She kind of took over after they scored, and that’s what a star should do.”

Wangsgard added two more goals — one in the 60th minute and another in the 63rd off a pass from Allen. Wangsgard has 46 goals in 11 games this season, and 187 tallies in 58 career games. She also reached the 400-point milestone for her career, tallying 13 points in the game to give her a total of 412.

Allen capped the scoring in the 68th minute, triggering the mercy rule on a breakaway that started with a long feed from goalkeeper Adalyn Enslen.

Seven Grantsville players found the scoresheet in total, led by Wangsgard’s six goals and one assist. Allen had two goals and two assists for six points, and Gardner’s goal gave her two points. Enslen, Adams, Carlsen and Whitworth each had an assist, and Enslen had seven saves in goal.

“We marked up their main forward, and she didn’t have anything closer than 20 yards,” Lowry said. “It was pretty awesome — really good defense. I’m really happy.”

Grantsville faced Morgan on the road Thursday after press time. The Cowboys will face Providence Hall on the road Tuesday afternoon, with their next home game scheduled for Oct. 1 against South Summit.