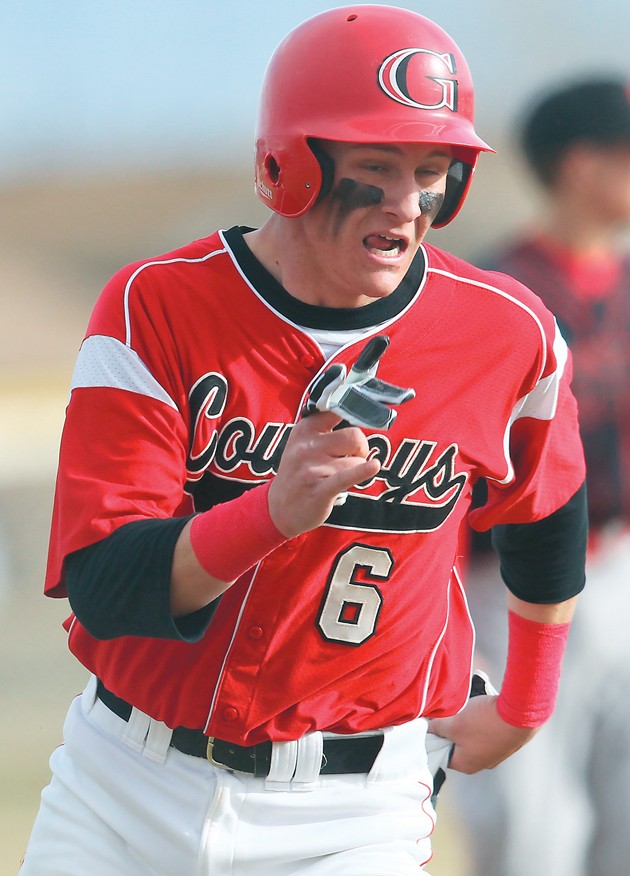 The Grantsville Cowboys kept pace and eventually passed the Bear River Bears in a 6-5 victory Thursday to hold on to second place in Region 11.

Senior Kelby Landon stepped into the box with the bases loaded in the sixth inning and the score tied at 4. He delivered a base hit up the middle that scored senior Landon Hammond and junior Wyatt Smith for the go-ahead runs.

Bear River took a 4-2 lead in the fifth inning, but the Cowboys battled back in the bottom half to tie things back at 4. Junior Dalen Williams drew a walk to start the bottom of the fifth, and the Bears’ pitcher balked to put him at second. Landon hit a double to score Williams and make the score 4-3. Senior Skyler Cloward came up next and hit a line drive that was dropped. He pulled into first base safely and advanced Landon to third. Landon came home on the next play, as a passed ball allowed him to slide in for the tying run. Landon went 2-for-3 with 3 RBIs, two runs scored, a walk and a stolen base.

The Cowboys had four errors, but Anderson said he isn’t too worried about that going forward.

“For the most part we’ve played really well defensively,” he said. “We had one or two innings down in St. George where we kind of struggled, but for the most part we’ve been solid. I’m a little surprised sometimes when [errors happen]. We’ll just keep working and stay with the fundamentals.”

Anderson said games against Bear River usually play out the way this one played out with a tight score throughout and occasional mistakes.

The Bears threatened to recapture the lead in the top of the seventh inning. They got a base hit and an RBI double to start the inning, and then a passed ball put the runner at third with one out. The next play was a groundball to senior Manny Begay at second. Begay looked the runner back to third base, and threw to first for the second out. That brought up Bear River’s Kyle Zundel with two outs.

Hammond and Zundel battled to a full count, but Zundel worked out a walk. He then stole second to have both runners in scoring position and two outs. Hammond forced a grounder, and the Cowboys escaped with the one-run victory.

“We made it more interesting than we needed to,” Anderson said. “We made a couple bad pitches there and let them get to a point where they had a chance to tie and win. [Hammond] gutted it up when he had to and made pitches.”

Grantsville took the early lead in the bottom of the first inning. Landon walked and then stole second. He moved to third on a bad throw to try and catch him stealing. Sophomore pitcher Wyatt Barrus popped a pitch up, but Bear River’s shortstop dropped the ball. Landon scored for the 1-0 lead, and Barrus ended up at second base.

The Bears took over the lead in the top of the fourth inning. Barrus faced Zundel with the bases loaded, but he mowed him down for the second out. The Cowboys looked to get out of the inning unscathed, but an error on junior Nick Arbon allowed the runner from third to score. An infield hit followed, and the Bears had a 2-1 lead.
The Cowboys tied the game again at 2 with Begay on third base and Arbon at second base. Hammond soared a sacrifice fly to score Begay. The Bears scored two more in the top of the fifth before Grantsville came back again to win the game.

The Cowboys defeated Hunter on Monday in a non-region game 2-0. Both Hammond and Arbon contributed RBIs to the Cowboys’ victory. Grantsville next faces rival Tooele on Wednesday at 3:30 p.m.