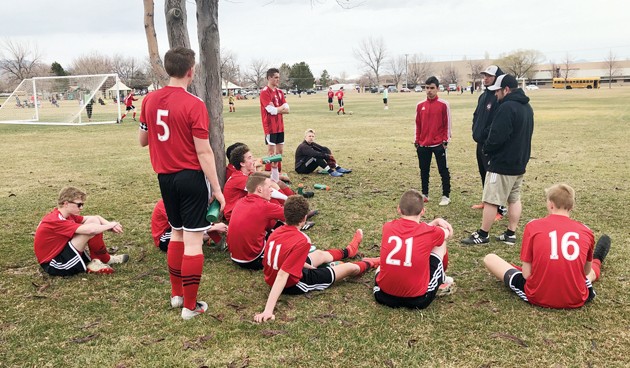 The Grantsville boys soccer team beat Merit Academy 12-0 last season, and might have come into Monday’s home game against the Knights expecting a similar result.

Instead, the Cowboys put together an effort that left coach Travis Lowry baffled after a 2-1 loss to the Class 2A Knights. Grantsville (1-2) dominated possession, but its attack was out of sync all afternoon.

“Very frustrating — it was probably one of the most frustrating days in years,” Lowry said. “Our finishing — shooting was horrible. Obviously, we couldn’t score.”

On the other end, Merit (1-3) didn’t have many quality opportunities, but the Knights managed to convert on the chances they did have. They clanged a free kick off the crossbar from near midfield in the 18th minute and nearly took a 1-0 lead. Grantsville had a couple chances — the best of which was a header by Nemo Fuluvaka that was saved in the 23rd minute — but a turnover in the offensive end led to a partial breakaway for the Knights in the 33rd minute. Merit scored on the play and maintained a 1-0 lead at halftime.

“I saw some laziness out of some players, which I didn’t predict,” Lowry said. “I felt like they wanted to win. I thought they were ready. I can’t put my finger on it yet. Positions where we needed guys to be working, I don’t know if they thought it was going to be easy today, but that’s just not how you need to go about things. That’s not how we talk about stuff in practice. That’s not how we train.”

The Cowboys had some pressure to begin the second half, with Weston Payne shooting wide in the 44th minute. Unfortunately for Grantsville, the Knights found just enough space to get something going two minutes later, and a perfectly placed shot got past Cowboys goalkeeper Zach Carver for a 2-0 advantage.

Grantsville thought it had cut the lead in half in the 54th minute on a give-and-go between junior striker Tanner Stettler and Fuluvaka, as Fuluvaka sent Stettler in on a breakaway. The goal was waved off, however, as Fuluvaka was ruled to have been offside by the assistant referee before he made the pass to Stettler.

Stettler finally did score a little more than two minutes later when Fuluvaka was fouled inside the 18-yard box, setting up a penalty kick. Stettler converted for his second goal of the season, but Grantsville couldn’t find the equalizer despite sustained pressure on the Knights’ back line.

“We had chances,” Lowry said. “Lots of them. That was rough. We tried guys in different positions to see if it would wake other guys up. Maybe it will.”

The Cowboys have two more non-region home games — Thursday against American Preparatory Academy-West Valley and March 17 against Juab — before the Region 13 opener March 20 at home against Providence Hall. With a challenging region schedule ahead of them, Lowry hoped the Cowboys learned a lesson from Monday’s loss.