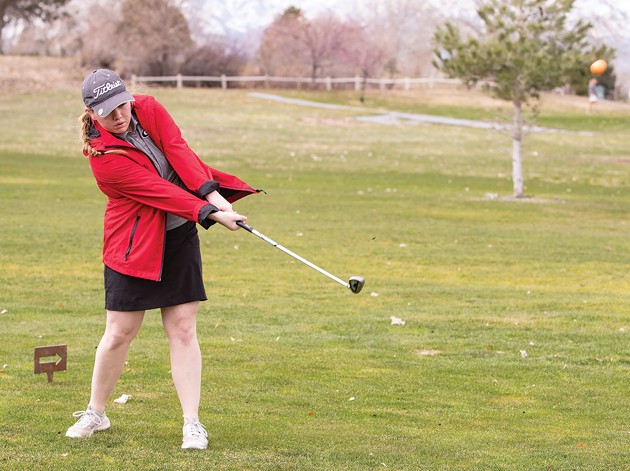 Grantsville’s Mashayla Scriven gets her ball up in the air during Wednesday’s Region 13 golf match at Oquirrh Hills Golf Course in Tooele. Scriven shot a 93, good for second place in the individual standings as the Cowboys finished second as a team.

The Grantsville girls golf team hasn’t had much of a chance to practice this season, and its only time on the course came earlier this month in St. George.

However, the lack of practice didn’t seem to affect the Cowboys too much during Wednesday’s Region 13 match at Oquirrh Hills Golf Course in Tooele. Grantsville finished second out of four teams, thanks in large part to a pair of top-10 finishes by Mashayla Scriven and Erin Shipman.

The Cowboys finished with a team score of 447, 54 strokes behind Morgan’s winning mark of 393. Scriven shot a 93 after firing a 44 on the front nine, good for second place in the individual standings and just a shot behind medalist Tacey Durrant of Morgan. Shipman’s score of 103 tied her for sixth place with Morgan’s Samantha Preslar.

Grantsville’s team score included a score of 112 by Gracie Lake and a 139 from Afton Bodell. Sydnee Jensen also competed for the Cowboys, shooting a 143.

Morgan’s Haldyn Anderson was third with a 98, followed by teammates Kaylee Wardell (101) and Lauren Telford (102). Summit Academy’s Olivia Stephens finished a stroke behind Shipman and Preslar in eighth place with a 104. Morgan’s Taylor Candie and Judge Memorial’s Nettie Rooney tied for ninth place at 108.

Judge Memorial finished six strokes behind Grantsville for third place in the team competition. South Summit was another 19 strokes back in fourth place, while Summit Academy didn’t record a team score as it had just three competitors.