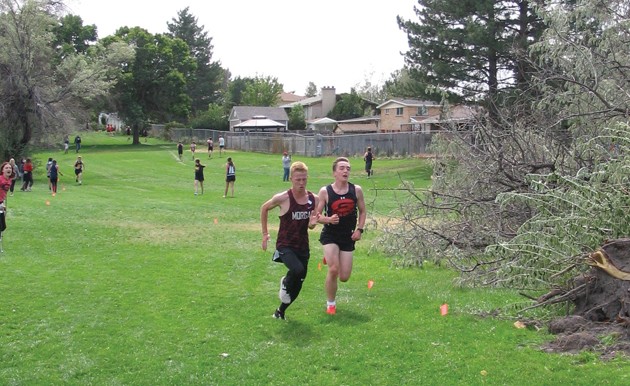 With the evidence of Tuesday’s wind storm strewn across the course and a chill in the air, conditions for Wednesday afternoon’s Pre-Region 13 cross country meet at the Cottonwood Complex in Millcreek weren’t exactly ideal.

However, that didn’t stop the girls and boys from Grantsville from showing what they’re capable of accomplishing as the season enters its final stretch. The girls team brought home a second-place finish and the boys finished third on the same course that will host the Region 13 championship meet in a little more than a month. The course was markedly different from the last time the Cowboys saw it at the Premier Invitational in August, as a large tree near the finish line was felled by Tuesday’s wind and branches and other debris could be seen throughout the park.

Grantsville’s Ellie Lowery finished second overall in the girls’ race with a time of 21 minutes, 15 seconds, putting her 1:18 behind winner Oakley Olson of Morgan. Teammate Bethany Swallom was the next girl to cross the line in 22:02, with Erin Petersen finishing seventh in 22:55 and Reagan Wexels in 10th in 23:12. Patience Garcia’s 14th-place finish in 23:29 gave Grantsville a team score of 35, seven points behind Morgan and 42 points better than Judge Memorial. Providence Hall was fourth with 102 points. South Summit and Summit Academy only had four runners each, and didn’t record team scores as a result.

Grantsville’s boys finished with 61 points in a tight battle between the top four teams. Morgan won the meet with 42 points, followed by Providence Hall with 53. Grantsville edged Judge Memorial by just three points for third place. South Summit was a distant fifth with 151 points, while Summit Academy had just four runners competing.

The Region 13 teams will be back in action next Wednesday at Scera Park in Orem for a meet hosted by Providence Hall.