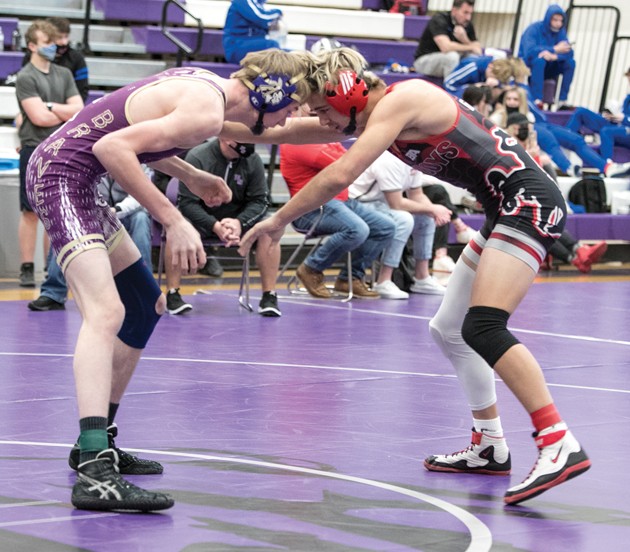 Grantsville’s Grant Rounds (right) battles with North Summit’s Kaleb Orgill during the Best of the West Tournament at Tooele High School on Jan. 9. Rounds finished sixth in the Class 3A state wrestling tournament at 160 pounds on Friday.

February 23, 2021
Cowboys have three placers at 3A tourney

The Grantsville boys wrestling team didn’t have much in the way of state tournament experience coming into Friday’s Class 3A tournament at the Sevier Valley Center in Richfield, so it was a bit of a learning experience for the Cowboys.

Though some of the Cowboys took their lumps in the tournament, three Grantsville grapplers came away with medals, and GHS finished 12th in the team standings.

“It was a tough tournament,” Grantsville coach Clarence Evans said. “I had a couple of (wrestlers) have a bad match, and it’s kind of a bad time to have a bad match, but that happens sometimes. Overall, they did pretty darn good, I thought.”

Kole Johnson placed fifth at 106 pounds, bouncing back from a quarterfinal loss to Juab’s Rowdey Peterson with an 8-0 major decision over Emery’s Monty Christiansen. He got into the fifth-place match with a pin against Richfield’s Drexton Torgerson, and he finished his tournament with a 15-0 tech fall against San Juan’s Deklan Helquist.

Cruz Baldovinez was fifth at 170 pounds after also bouncing back from a quarterfinal loss. Union’s Cadence Ross send Baldovinez to the consolation bracket, where he went on to pin South Sevier’s Ethan Richards and Manti’s Dane Seely. In the final match of his high school career, Baldovinez edged Emery’s Maddex Christman in a 9-7 decision.

Grant Rounds placed sixth at the state tournament for the second year in a row. He won his opening 160-pound match by pin over Morgan’s Lance Toone, but was pinned by Juab’s Taylor Newton. He rebounded with a pin over Emery’s Gregory Suwyn to advance to the fifth-place match, where he lost a 14-11 decision to American Leadership Academy’s Cale Miner.

“Their mental attitude when they did get beat — they weren’t about to quit,” Evans said. “They were still going to fight all the way through there. They wanted to finish strong, and they did.”

Evans noted that his three placers could have finished even higher in a normal year, when the bracket allows wrestlers to battle back for a third-place finish after an early loss. This year, because of COVID-19 restrictions, only the championship semifinal losers were able to compete for third place.

“I was a little bit disappointed in the COVID bracketing — I had a couple guys who went 4-1 and ended up fifth, and if you lose before the semifinals, you don’t get to battle back for third,” he said. “I think (Johnson and Baldovinez) both could have, and I think (Rounds) could have gotten there for a third or fourth-place finish as well. You just don’t get that opportunity if you lose in the quarterfinals or before.”

Two other wrestlers just missed placing, as 152-pounder Ethan Rainer and 195-pounder Bridger Edwards both fell in the consolation semifinals.

“The kids did good,” Evans said. “It was some dang tough wrestling, that’s for sure. They need to work on preparing more in the offseason. They’re kind of behind the eight-ball with the experience level difference, and they need to get as much experience as they possibly can year-round if they want to step up on that podium.”