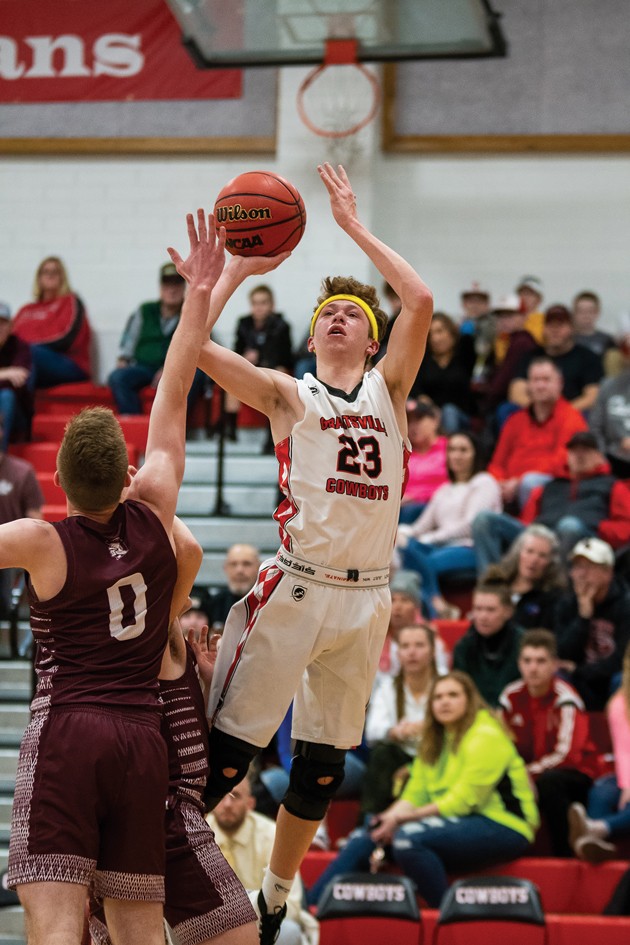 Grantsville’s Tuhker Mulford (23) puts up a shot during Friday’s Region 13 boys basketball game against Morgan at Grantsville High School. Mulford scored 12 points in the Cowboys’ 49-45 win over the Trojans, marking the first time Grantsville has beaten Morgan in the past three seasons.

Shortly after funeral services celebrating the lives of Consuelo Alejandra Haynie, Alexis Haynie, Milan Haynie and Matthew Haynie, the community of Grantsville came together for a couple hours Friday night, looking to escape the pain of recent events that have shaken Tooele County to its core.

A high school boys basketball game between Grantsville and Morgan served as a reprieve — a chance to experience joy again, if only briefly. And while the host Cowboys defeated the Trojans, 49-45, it was the sense of community that ultimately prevailed.

“I know the kids have had a long week,” Grantsville interim coach Stace Riding said. “There’s a lot going on with everything.”

A moment of silence was held in honor of the Haynie family before the game, and Morgan High athletic director Kade Morrell and head basketball coach Brad Matthews presented Grantsville High principal Kenna Aagard with funds raised at the previous night’s girls basketball game in Morgan during pregame ceremonies. Each team wore yellow headbands, which were provided by the Trojans.

With everything that had gone on in Grantsville over the previous week, Riding didn’t know what to expect from his team. The fact the Cowboys (9-8, 4-2 Region 13) hadn’t beaten Morgan (10-7, 4-2)  since December 2016, and the Trojans beat Grantsville just 16 days earlier, loomed over GHS from a basketball standpoint.

The Trojans got out to a five-point lead after one quarter, with the Cowboys cutting the lead to one by halftime. However, Morgan stretched the lead back out to nine points in the third quarter, and it looked like the Trojans were about to extend their winning streak over GHS.

“For us to come out like we did, I couldn’t be more proud,” Riding said. “I do want to give major props to Morgan — they reached out and they wanted to help. They’re a class act.”

That’s when the Cowboys stepped up their game, taking their first lead since early in the first quarter with an 11-0 run. Tuhker Mulford led Grantsville’s late surge with clutch free-throw shooting down the stretch, along with several key buckets that helped the Cowboys outscore Morgan 17-10 in the fourth quarter.

“We were really struggling, so I felt like we needed to start doing something to get us going again,” Mulford said. “We needed to play more as a team, limit the turnovers and get the team chemistry going.”

“I felt like we just got after it,” Riding said. “That’s what I wanted. It was a little rough at first — both teams. We stepped up our intensity the last quarter and a half.”

The victory pulls Grantsville into a second-place tie with Morgan in the Region 13 standings, one game behind first-place Judge Memorial. It also leaves the Cowboys in control of their own destiny — if they win their remaining games, they will clinch at least a share of the region championship.

“It’s been a while since we beat Morgan, so it’s really amazing,” Mulford said. “That was probably one of our tougher — if not the toughest — games. Now we know we can battle through and do anything.”

Grantsville will travel to Kamas for a game against South Summit on Wednesday. The Cowboys will also face Summit Academy on Friday in Bluffdale, with their next home game coming Feb. 5 against Judge Memorial.