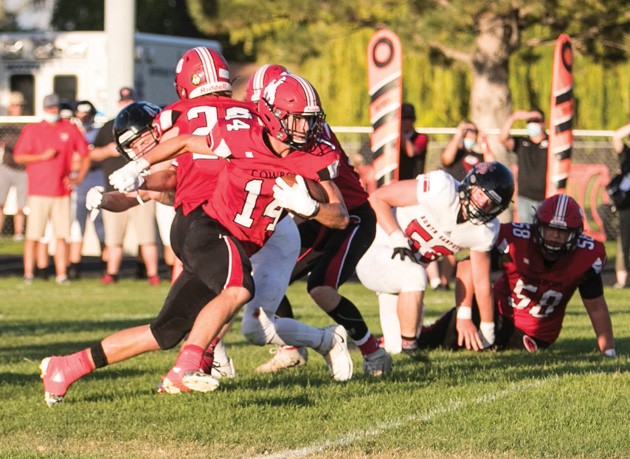 Grantsville’s Blake Thomas (14) carries the ball during the Cowboys’ non-region game against North Sanpete on Aug. 14 at Grantsville High School. The Cowboys, ranked sixth in Class 3A, will play host to No. 11 Emery in the first round of the Class 3A state football playoffs Friday at 6 p.m.

The Grantsville football team enters Friday’s Class 3A first-round state playoff game against Emery on a two-game losing streak, having dropped back-to-back lopsided decisions to Juan Diego and Morgan to wrap up the regular season.

A struggling running game was a large part of that, and Cowboys coach Kody Byrd’s team is looking to get things back on track Friday at 6 p.m. at Cowboy Stadium.

“I think (Emery’s) a good matchup for us,” Byrd said. “We played a tough schedule and we got through it, and I think we’re ready for the playoffs. We’ve got a good idea of who we are and what we do, so it will be a good contest.”

Sixth-ranked Grantsville (5-5 overall) ran for 1,425 yards over its first eight games, an average of 178.1 yards per contest. The Cowboys ran for a season-high 294 yards in a 45-27 win over Summit Academy on Oct. 2, though that was their lone victory in a stretch where they lost four of five to end the season. In those losses to Beaver, South Summit, Juan Diego and Morgan, the Cowboys ran for a total of 171 yards, or an average of 43.7 yards per game.

Byrd is confident that the Cowboys can get things turned around, mainly because their offensive line is back to the way it was earlier in the season when Grantsville ripped off four consecutive wins.

“We just didn’t play well, that’s the biggest thing,” Byrd said. “Hopefully, we’ve got those things ironed out, we’ve got everyone back and healthy and we’re ready to go.

“If we’re running the ball well, I think it kind of lifts up everything … it opens up our pass game and brings the energy and excitement to our defense.”

A stronger run game can only help quarterback Caleb Sullivan, who has had a solid season for Grantsville. He has completed 160 of his 255 pass attempts (62.7%) for 1,736 yards, 13 touchdowns and eight interceptions, and he’s added another 310 yards and three TDs on the ground. Blake Thomas has rushed for 751 yards and 12 scores, and Gabe Mouritsen has 135 rushing yards and a TD for a team that prides itself on a balanced offensive attack.

Noah Mouritsen comes into Friday’s game with 47 catches for 525 yards and three touchdowns, and Dillen Richardson has caught 31 balls for 335 yards and four TDs. Josh Staley has 22 receptions for 284 yards and a TD.

Defensively, the Cowboys will look to regain the form they showed when they started the season 4-1. In that stretch, they allowed just 77 points — 47 of which came in their season-opening loss to North Sanpete. In the five games since, they haven’t given up fewer than 22 points in a game, and have been outscored 167-105.

Slowing down the No. 11 Spartans (5-5) won’t be an easy task, as they’ve shown an ability to put up big numbers. They put up 54 points in a win over Union, 49 against Grand, 38 against South Sevier and 56 against Carbon in blowout wins, and also put up 35 in a close season-ending loss to San Juan.

“They do throw the ball really well,” Byrd said. “They’ve got some speed and a really athletic quarterback, so they’ll definitely push us that way. They’ve got some big, strong guys up front, but I think there’s some things we can take advantage of. We jus have to play well and execute what we do. They’re definitely a good team that’s competed well throughout the year, and we’re definitely not taking them lightly — that’s for sure.”

The winner of Friday’s game will face either No. 3 Summit Academy or No. 14 American Leadership Academy in a quarterfinal game next week. While it isn’t looking past Emery, Grantsville likes its draw in the postseason bracket and feels it has the potential to make a run.

“I think that we match up well with the teams we’re up against,” Byrd said. “It definitely will be hard and you can’t take anybody lightly, but from a matchup standpoint on paper, we match up pretty well against those teams.

“It’s amazing that we’ve gotten this far, and we appreciate the hard work from our administration and our custodians and our kids and community for staying healthy and allowing us to get all these games in,” he added. “It’s good to see, and we haven’t had any sick kids in our program. Hopefully, we keep it that way.”