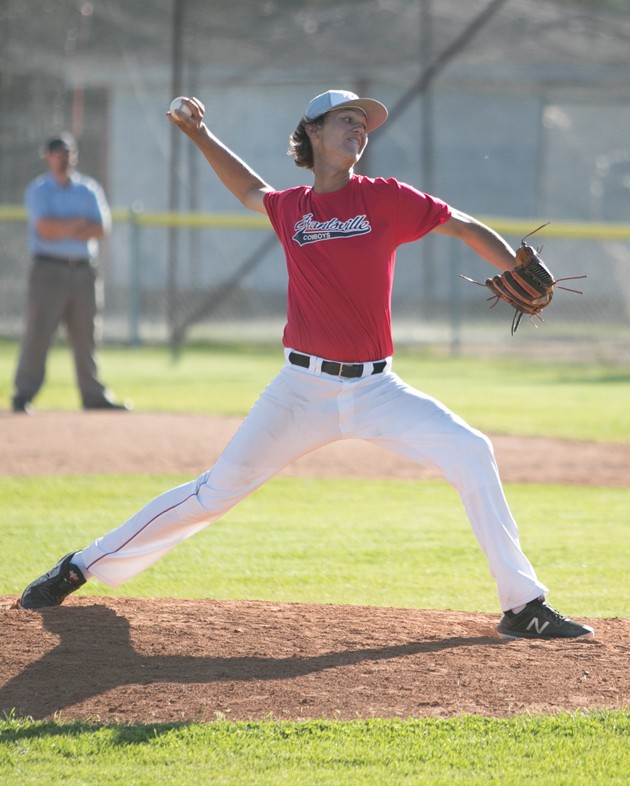 Grantsville’s Kaden Lund throws a pitch during Monday’s summer league baseball game against Brighton in Grantsville. Lund didn’t allow any earned runs, but the Cowboys lost to the Bengals 6-5.

July 7, 2020
Cowboys’ lead slips away in loss to Brighton

Just as quickly as the Grantsville baseball team found its groove at the plate Monday evening against Brighton, the Cowboys’ momentum ground to a halt — and it ultimately cost them a victory.

After scoring five runs in the third inning to take a 5-2 lead, the Cowboys stranded five runners on base, including four in scoring position, while the Bengals took advantage of some miscues in the field to rally for a 6-5 win on Grantsville’s home field in Salt Lake County’s summer league. The loss came less than three weeks after the Cowboys beat the Bengals 7-3 in Cottonwood Heights.

“It felt like (Brighton) finally got a couple of key hits, and we didn’t,” Grantsville coach Aaron Perkins said. “Summer ball, for me, is about learning what you’re not good at as a player and focusing on those areas and improving on those areas by next year so it makes you a better all-around player. If we don’t know what our failures are, it’s hard to fix them. This is something we can fix. We can be better hitters with guys on (base).”

Brighton led 1-0 after one inning after a pair of Grantsville errors led to an unearned run. The Bengals tacked on another run against Cowboys starting pitcher Josh Staley in the top of the third on a one-out RBI single to right field, but Grantsville came storming back in the bottom of the inning.

Kaden Kelley led off with a walk, and Easton Casper reached on an infield single to set up Zach Hale’s RBI single to right that cut the Cowboys’ deficit to 2-1. Tyson Hainke walked to load the bases, and leadoff batter Caleb Sullivan ripped a two-run double to left-center to put Grantsville in front. Broc Miller’s walk loaded the bases again and led to a pitching change, and Hainke and Sullivan both scored when Brighton botched Sam Daybell’s flyball to right field.

That was all the offense Grantsville got. After Brighton cut the lead to 5-3 on a squeeze bunt in the top of the fifth against Grantsville reliever Kaden Lund, the Cowboys had a chance to score in the bottom of the frame after Hainke hit an infield single and Miller added a one-out single to shallow left. However, the Bengals got out of the jam when Staley grounded out to second base to start a double play.

Brighton scraped together another run in the top of the sixth on a Grantsville error to make it a 5-4 ballgame. However, things got off to a promising start for the Cowboys in the bottom half as Daybell was hit by a pitch and Blake Thomas hit a double to deep center field, giving Grantsville two runners in scoring position with nobody out. Unfortunately for the Cowboys, those were the last two baserunners they had in the game, and they were left stranded on the basepaths as the Bengals retired the final six Grantsville batters in order.

“We should score two or three (runs) right there, and probably the game’s over,” Perkins said. “Baseball’s a game of momentum. We gave them the momentum, and it’s tough to get it back sometimes.”

“Josh (Staley) came out and wasn’t expecting to pitch tonight, but he threw three good innings,” Perkins said. “‘Pappy’ (Lund) came on and threw great, but we made a couple errors behind him and that really hurt. A couple balls got past our outfielders and gave them some extra bases.”

Casper was the only Cowboy with multiple hits, going 2-for-3 with a run scored.

The Cowboys will face Murray on the road Wednesday night, with a home game against Herriman on Friday and a road game at Cyprus next Monday. The season-ending tournament will take place July 17-21.