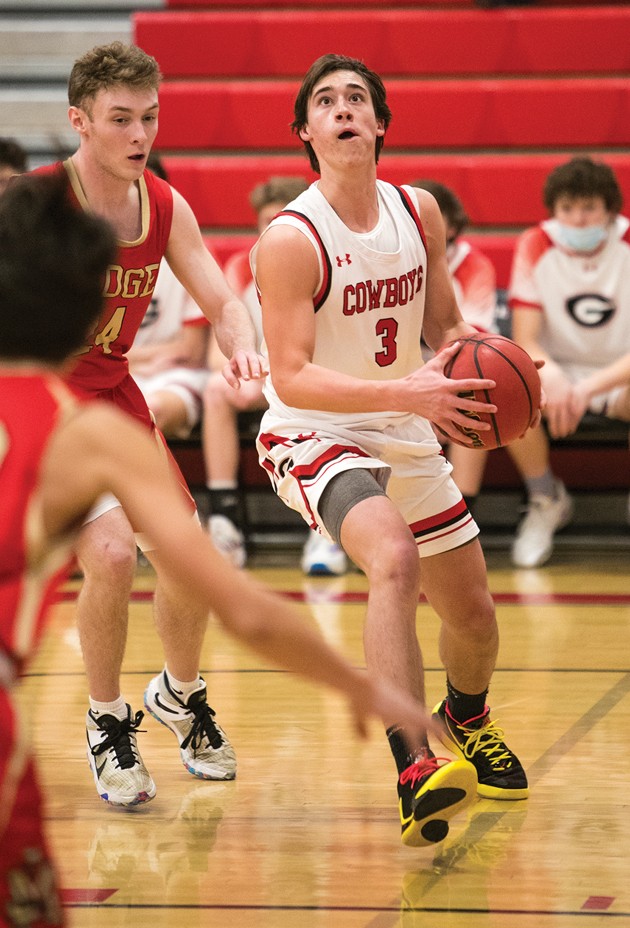 Grantsville’s Tate Allred (3) drives past Judge Memorial’s Dom Burns for a layup during the third quarter of Wednesday’s Region 13 boys basketball game at Grantsville High School. Allred scored 15 points — eight of which came in the third quarter — as the Cowboys beat the Bulldogs 73-60.

Through the first three games of the Region 13 boys basketball season, Grantsville was cruising past its opponents on the strength of a formidable perimeter-shooting attack.

That might have caused Wednesday night’s opponent, Judge Memorial, to forget about one of the Cowboys’ most dangerous pieces — though at 6-foot-7, he’s pretty hard to miss. Senior center Davin Ekins dominated the Bulldogs, scoring 30 points and snagging 17 rebounds in Grantsville’s 73-60 win at Grantsville High School.

The Cowboys (11-1, 5-0) maintained their grip on the top spot in Region 13, and haven’t lost to a Class 3A opponent all season. Despite a tough first couple minutes that allowed the Bulldogs (8-6, 3-2) to take an early five-point lead, Grantsville was never really in any danger of losing on Wednesday, either. Back-to-back 3-pointers by Tate Allred, a reverse layup and a three-point play by Ekins, and another 3-pointer by Carter Killian sparked a 14-3 run that put the Cowboys in control with just under three minutes left in the first quarter, and they led the rest of the way.

Judge Memorial briefly cut the Cowboys’ advantage to a single point with 5:01 left in the second quarter as Dom Burns knocked down a 3-pointer from the left wing. However, Grantsville outscored the Bulldogs 16-6 over the rest of the period, including 3-pointers by Killian and Brigham Mulford. Ekins scored eight points in the quarter, including a perfect 4-for-4 performance from the free-throw line, to help the Cowboys take a 37-26 lead into the locker room at halftime.

Allred scored Grantsville’s first six points of the second half, getting easy layups by driving to the basket from the left wing. The Cowboys led by as many as 16 points early in the third quarter before the Bulldogs cut it to 10 on a free throw by Burns with 2:30 left in the period. But another drive to the basket by Allred, followed by a pair of nice post moves by Ekins for layups, restored Grantsville’s lead at 51-35 entering the fourth quarter. JJ Backus added a corner 3-pointer on the Cowboys’ first possession of the final frame to cap a 9-0 run.

To their credit, the Bulldogs didn’t go away over the final eight minutes. A three-point play by Ekins had the Cowboys up 67-52 with 2:15 left, but Judge put together an 8-1 run over the next 59 seconds, aided by 3-pointers by Aaydan Saucedo and Nico Smith. That had the Bulldogs down 68-60 with 1:16 left, but the Cowboys were 5-of-6 from the foul line down the stretch to put the game out of reach.

Allred finished with 15 points, while Brigham Mulford added 10 points. Killian had 10 points and eight assists, Tuhker Mulford had five points and Backus had three. Grayson McKeever had five rebounds and four assists for the Cowboys.

Burns led Judge Memorial with 26 points. Saucedo had 13 and Jace Holmes added 11, while Smith had five and Matthew Skrout had four.

Grantsville will face Providence Hall in a Region 13 game Friday night in Grantsville to begin the second half of the region schedule. The Cowboys will then travel to Morgan to face their longtime rival on Wednesday before another home game against South Summit on Feb. 5.