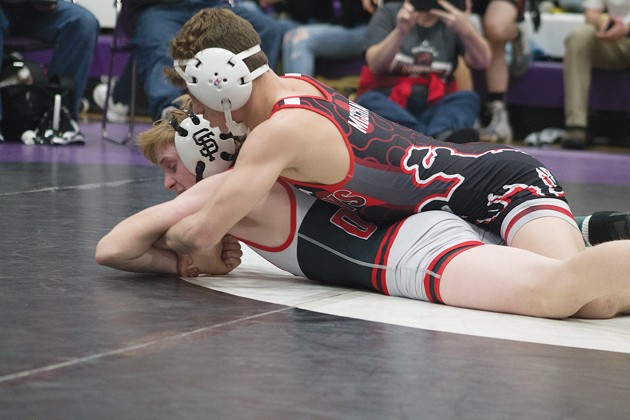 Grantsville’s Joseph Mecham gets the upper hand on Spanish Fork’s Bridger Warren during a match at the Best of the West tournament Friday at Tooele High School. Mecham will wrestle Payson’s Cole Jensen during the All-Star Duals in a rematch of the 2019 Class 4A 113-pound state championship match on Tuesday at the UCCU Center in Orem.

When Joseph Mecham started wrestling in seventh grade, he quickly learned how tough wrestling could be as his first practice partners were all repeat elementary and middle school state champions who had competed nationally for several years.

“They were/are great wrestlers, and I got tired of losing every day,” Mecham said. “I wanted to get better and learn how to stay off my back.”

Mecham’s early opposition in the wrestling room, coupled with excellent coaching and terrific practice partners, pushed him to find ways to get better and learn new moves to counter his inexperience.

“I started at 70 pounds and wrestled 73 at the end of seventh grade,” he recalled. “At the end of my eighth-grade year, I wrestled 85 at Junior High State and placed third.”

The summer before high school, Mecham hit the weights hard and was close to 100 pounds when the wrestling season started. Although he topped the scale at 103 pounds at state, he still managed to place sixth in the 106-pound bracket at the Class 3A state championships as a freshman for Morgan High.

In 2018 as a sophomore, Mecham continued to improve and advanced to the championship bouts at both divisionals and state. At divisionals, he lost a one-point decision to Richfield’s Denim Torgerson and hoped to come back and beat him at state. Mecham did reach the state final and a re-match with Torgerson, but lost by decision 5-2 and placed second.

The summer before his junior year, Mecham moved to the Tooele Valley and enrolled at Tooele High where both of his parents were teachers. As a junior, coached by Cody Valdez and his staff, Mecham won the Skyhawk Showdown, Davis Duals, Best of the West Tournament, AK-47 Duals and placed fourth at the Rumble. He was chosen as a 4A All-Star at 113 pounds and was on his way to a state title before a 4-3 loss in the divisional championship bout to Payson’s Cole Jensen seemed to put a roadblock on his path. The next week at state, Mecham reached the finals and had the opportunity to avenge his divisional loss and took down Jensen 9-6 to win the 4A state title at 113 pounds for Tooele.

As a senior, Mecham returned to the 3A ranks as a Grantsville Cowboy and moved up to the 120-pound weight class. Under the direction of coach Clarence Evans and his staff, he won first place at the Cowboy Duals, Desert Storm Classic and Best of the West Tournament. In November, he signed a national Letter-of-Intent to wrestle for Gardner-Webb University, a Division I school in Boiling Springs, North Carolina.

After his performance last week at the 3A Duals, including a 5-2 victory in a re-match with Torgerson, Mecham was selected for a second time to wrestle in the All-Star Duals. He will face off against Payson’s Cole Jensen in a re-match of the 2019 State Final.

In the off-season, Mecham trains and competes with coach Cyler Sanderson at Sanderson Wrestling Academy and has participated in national tournaments in Ohio, Colorado, Virginia, Nevada, and North Dakota as he continues to hone his craft.