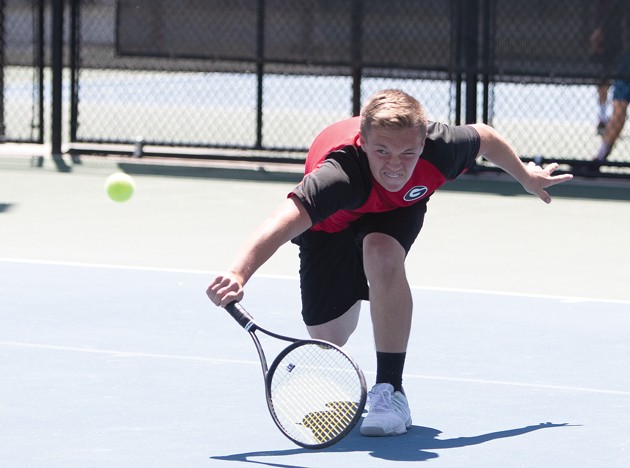 Grantsville’s Camdin Nelson tries to get to the ball during the Class 3A third singles championship match Saturday at Liberty Park in Salt Lake City. Nelson lost the match 6-2, 6-2, earning a second-place finish and helping Grantsville finish third as a team.

There are a number of signs that spring is here, including flowers blooming, birds singing and the Grantsville boys tennis team making its presence felt at the state tournament.

On Saturday at Liberty Park in Salt Lake City, the Cowboys were at it again, finishing third in Class 3A behind a dominant Waterford squad and a tough team from Manti. The Cowboys saw all three of their singles players reach the second day of the tournament, as well as one of their two doubles teams. Freshman Camdin Nelson made it all the way to the championship match at third singles in his first-ever state tournament appearance, giving Grantsville a one-point edge over Rowland Hall for third place.

Nelson’s tournament began with a pair of dominant performances on Thursday, beating Grand’s Cody Johnston 6-1, 6-3 in the first round before rolling past Rowland Hall’s Tim Zeng 6-0, 6-1 in the quarterfinals. On Saturday morning, he held off Manti’s Connor Bushnell in a hard-fought 7-5, 3-6, 6-1 win before falling to Waterford’s Arvind Mudaliar 6-2, 6-2 in the final.

Porter Whitworth was a semifinalist at second singles after cruising to victory in his first two matches. He beat South Sevier’s Garrett Jones 6-0, 6-2 in the first round, and defeated Morgan’s Kayden Martinson 6-2, 6-1 in the quarterfinals. In Saturday’s semifinal, he battled Manti’s Kevin Clark in a tough three-set match before falling 6-4, 4-6, 6-3.

Seth Beckett reached the semifinals at first singles in his senior season. He opened the tournament with a 6-2, 6-3 win over Grand’s Kai Wainer, then advanced with a 6-1, 7-5 win over Union’s Price Reid in the quarterfinals. He lost to eventual state runner-up Shilp Shaw of Waterford 6-2, 6-2 in Saturday’s semifinal round.

The team of Max Coon and Joey Kurtz made it to the semifinal round at second doubles. They beat North Sanpete’s Hayes Bailey and Koby Smith 6-3, 6-7 (6-8), 6-2 in the first round, and went on to beat Delta’s Eli Bliss and Brian Fowles 6-1, 6-0 in the quarterfinals. Manti’s Austin Cox and Grady Thompson beat the Grantsville team 7-6, 7-5 in the semis.

The Stansbury boys tennis team finished tied for 12th in the Class 4A state tournament, which took place Friday and Saturday at Liberty Park in Salt Lake City. The Stallions got their lone point when Nathan Leary defeated Ridgeline’s Matt Ensign 5-7, 6-0, 7-6 (10-8) in the opening round of the second singles bracket before falling 6-7 (5-7), 6-1, 6-0 in the quarterfinals to Salem Hills’ Sam Sorensen.

Stansbury sent all three of its singles players to the tournament. Brady Kimberling lost 6-3, 6-3 to Salem Hills’ Booker Ward in the first round of the first singles bracket, while Brigham DeBry lost 6-2, 6-0 to Desert Hills’ Carsen Kennedy at third singles. Tooele’s Jonah Wilson lost to Snow Canyon’s Lucas Jensen 6-1, 6-1 at third singles.

In addition to Wilson, Tooele had both of its doubles teams reach the tournament. Alex Dunn and Nathan Swan lost 6-2, 6-2 to Sal Jones and David Holme of Orem at first doubles, and Carl Raddatz and Brandon Wong fell 6-1, 6-1 to Kimbal Ricks and Monson Brown of Logan at second doubles.