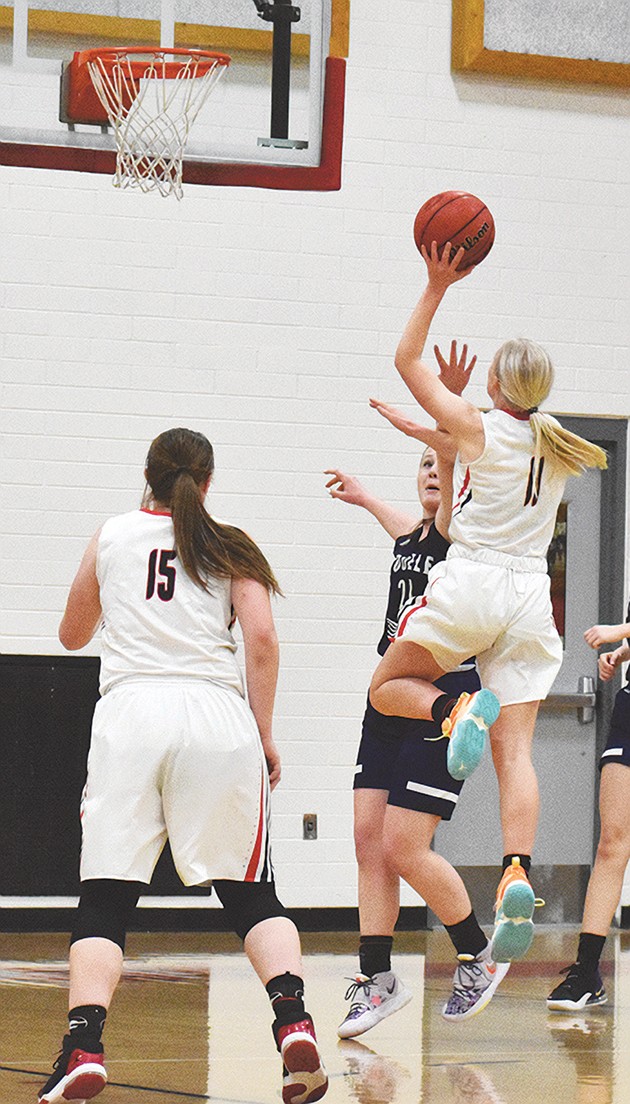 Grantsville rolls, even without White and Allen ♦

There were some notable holes in Grantsville’s starting lineup on Tuesday night as the Cowboys opened the Region 13 girls basketball season against Providence Hall.

Starting point guard Kenzie Allen missed her third game in a row, and star center Maison White was also unavailable. Ordinarily, a team missing more than 40 percent of its average scoring output would be expected to struggle. However, the Cowboys had little trouble, racing out to a 19-3 lead after one quarter on their way to a 44-23 win over the Patriots at Grantsville High School.

Grantsville (11-2, 1-0 Region 13) opened the game on a 7-0 run. Hillary Cloward scored on the Cowboys’ first possession, and Emily Backus converted a traditional three-point play and a layup within the first 2:15. Providence Hall (4-5, 0-1) didn’t get its first point until the Patriots hit a free throw with 4:05 left in the first quarter, and proceeded to allow a 3-pointer and an and-one by Backus before getting its first field goal with 1:58 left in the period. Chloe Butler, Backus and Emily Ware all scored as part of a 6-0 Grantsville run to end the quarter.

Providence Hall scored the first four points of the second quarter before a pair of baskets by Ellie Thomas, including a 3-pointer from the right corner, extended Grantsville’s lead to 17. The Patriots were within 15 points at 24-9 with 4:50 left in the first half, but the Cowboys finished the second quarter on a 9-2 run, led by six points from Butler.

With a 33-11 lead, the Cowboys weren’t quite as sharp in the second half. They scored just two points in the third quarter, with those coming on a nice drive to the basket by Ryann Williams with 2:24 left in the period. Despite Grantsville’s sluggish start to the second half, the Patriots couldn’t get any closer than 16 points before the Cowboys put together a 9-2 run in the fourth quarter.

Grantsville traveled to Morgan for a Region 13 game that was not complete at press time Thursday night. The Cowboys will play host to region foe South Summit on Tuesday.