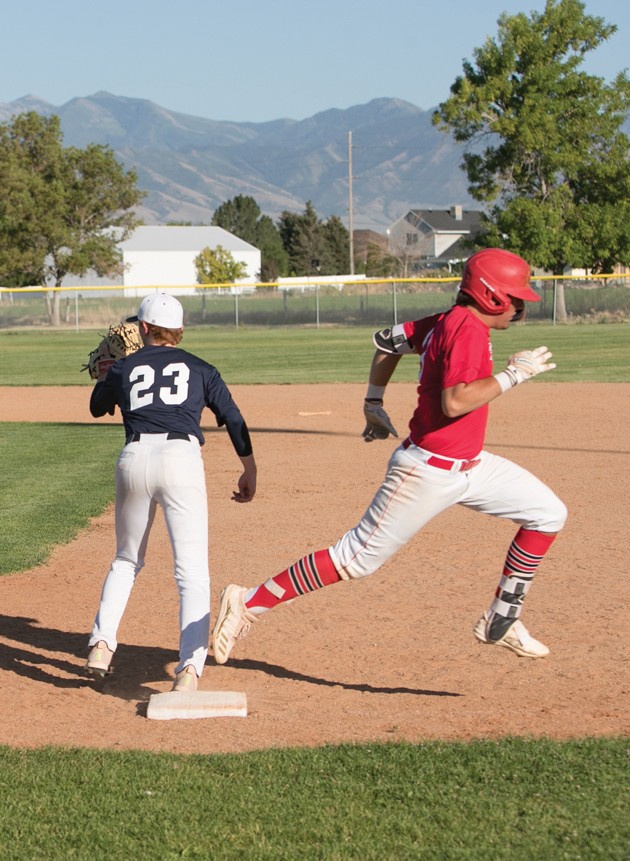 Grantsville’s Tyson Hainke sprints through first base during a summer-league baseball game against Brighton on Monday in Grantsville. Hainke was hit by a pitch and scored a run during the Cowboys’ 8-7 loss to Murray on Wednesday night.

Grantsville strands 14 runners on base in one-run defeat ♦

A few hours after Grantsville’s Varsity Prep baseball team erased a five-run first-inning deficit to beat Class 5A Murray, the Cowboys’ varsity squad found itself on the wrong side of a four-run margin in the final inning of Wednesday night’s game at Ken Price Field.

And while his team’s rally ultimately came up just short, allowing the host Spartans to escape with an 8-7 win in summer-league action, Grantsville coach Aaron Perkins couldn’t fault his team’s competitive spirit.

“I just told my team I’m proud of them for the way they fought back,” Perkins said.

Grantsville’s near-comeback began with a leadoff walk by Josh Staley, followed by a single by Baylor Hall and another walk by Sam Daybell that loaded the bases against Murray reliever Trevor Dale. After Kaden Kelley struck out, Easton Casper hit an RBI single to shallow left to drive in Staley and Zach Hale was hit by a pitch to bring Hall home. Jace Sandberg’s two-out, bases-loaded walk brought pinch-runner Keaton George in to score, but Dale struck out Caleb Sullivan to leave the bases loaded. In a game decided by a single run, Grantsville was done in by stranding 14 runners, including nine on either second or third base.

The Cowboys spotted the Spartans a two-run advantage through the first two innings. Grantsville stranded Broc Miller and Staley in scoring position in the first frame, while Murray scraped together a run on a bases-loaded single by Kindrick Tipping to jump in front.

In the second inning, Grantsville loaded the bases with three consecutive one-out walks by Kelley, Casper and Hale, but Tipping escaped the jam with back-to-back strikeouts. Then, Murray’s Corley Mutter reached base on a Grantsville throwing error to lead off the bottom of the inning, and he came in to score on a groundout.

“With this older group, we have to find a way to start games with more energy,” Perkins said. “We’ve been kind of getting behind in games and then we fight back and make it a ballgame, but it seems like we’re coming up a little short. I challenged them to come out with the same energy they had in the last inning in the first inning, and I think that will help a lot.”

The Cowboys got their offense going in the top of the third against Tipping, using a one-out single by Miller to spark a two-run rally. Staley was hit by a pitch, and Hall drove Miller and Staley in to tie the game with one of his team-high three base hits. Daybell walked to advance Hall to second base, but flyouts by Kelley and Casper got Murray out of the inning.

Murray’s McKay Turley walked and Spencer singled against Miller to open the third inning. Vaughn Wilson’s one-out single dropped into shallow right-center field, driving in Turley to put Murray in front 3-2. After a strikeout, Mutter and Kyler Nielsen walked to bring Spencer in to score the Spartans’ fourth run.

Grantsville tied the game again in the top of the fourth. Hale drew a leadoff walk and Tyson Hainke was hit by a pitch, and both advanced on Blake Thomas’ sacrifice bunt. Sullivan hit an infield single to load the bases, and Miller drove in Hale with a groundout to third. Hainke scored on an infield single by Hall, but the bases were left loaded when Daybell was robbed on a diving catch by Aiden Tipping in right field.

Murray took the lead back on an RBI single up the middle by Spencer in the bottom of the fourth. In the top of the sixth, the Spartans tacked on three more runs to take a seemingly commanding 8-4 lead on a bunt single by Turley that brought Aiden Tipping home, as well as a double by Spencer. Turley later scored on a wild pitch before Staley struck out the final two batters.

Hall went 3-for-4 with three RBIs for Grantsville, while Hale walked three times, was hit by a pitch, scored a run and drove in a run. Staley drew two walks and was hit twice, scoring a pair of runs.

“Some of our sophomores got in there — Broc (Miller) and Baylor (Hall) got a couple hits tonight,” Perkins said. “They’ve been hitting the ball well. I feel like our young guys did pretty well out there. We’re competing out there. We’ve just got to bring that energy the whole game.”

Spencer led Murray with a 4-for-4 effort at the plate, driving in two runs and scoring once.

Grantsville will wrap up the regular season Monday night in Magna against Cyprus. The Cowboys will take part in the Salt Lake County league’s postseason tournament July 17-18.